Kejriwal thanks Delhiites for choosing politics of development 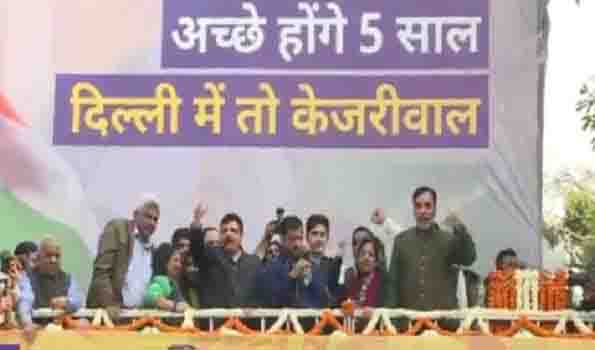 New Delhi, Delhi Chief Minister Arvind Kejriwal on Tuesday extended his gratitude to the people of national capital for choosing the politics of development, as the trends indicated a landslide victory of Aam Aadmi Party (AAP). "The people of national capital have given birth to a new kind of politics -- politics of development. Only those will be elected to power who will provide cheap electricity, Mohalla Clinics and roads to the people," Mr Kejriwal said while addressing the party workers here at the party headquarters.

"This type of politics will take India forward. This is a victory of Mother India (Bharat Mata). I am thankful to the Delhhites for electing their son for the third consecutive term. This is victory of those families, who availed all the facilities provided by the Delhi government," he added. AAP national convener, who was present along with Rajya Sabha MP Sanjay Singh, Raghav Chadha, party's Delhi convenor Gopal Rai, extended his gratitude to party workers for working day in and day out along with his family members, who were also present with him.