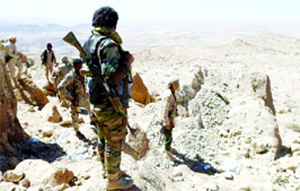 Agencies dubai, Yemen’s Houthis suffered a major setback with the killing of their political chief in a Saudi-led air strike, analysts say, in a signal of Riyadh’s determination to pursue its military campaign against the rebels. Saleh Al Sammad, the head of the Iran-backed Houthis’ main political body, died on Thursday in a strike in Yemen’s western province of Hodeida. He was the most senior Houthi official killed since a Saudi-led coalition launched its intervention against the insurgents in March 2015, after they seized control of large parts of Yemen including the capital Sanaa. Analysts say that despite renewed efforts to find a negotiated solution to the conflict, the latest strike shows not just Riyadh’s willingness to continue on the military path, but the coalition’s increasing effectiveness. “There is no other option at this stage,” says Mustafa Alani, an analyst at the Gulf Research Centre. “The Houthis are not flexible on the political settlement and - people are not noticing - there is real progress on the ground for the coalition.” While not often in the spotlight, Sammad was no minor figure. As head of the Houthis’ Supreme Political Council, he was in effect the president of the vast areas of Yemen under rebel control.