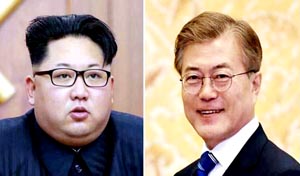 Seoul, Kim Jong-un will on Friday become the first North Korean leader to cross into South Korean territory since the end of the Korean War in 1953, a BBC News report said on Thursday. In newly announced details, South Korea said President Moon Jae-in would personally meet Mr Kim at the border at 09:30 local time (00:30 GMT). The historic talks will focus on the North's recent indications it could be willing to give up its nuclear weapons. The landmark summit is a breakthrough after years of mounting tension.