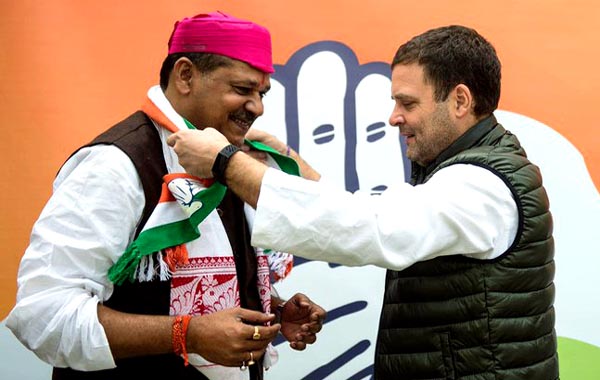 New Delhi, Suspended BJP leader Kirti Azad joined Congress on Monday in the presence of Congress president Rahul Gandhi. AICC in charge for Bihar Shktisinh Gohil was also present. Making the announcement on Twitter, Azad said, 'Today in front of Mr Rahul Gandhi I joined the Congress I felicitated him in traditional Mithila style.' Azad was to join the Congress last week, but that was postponed after the terrorist attack in Pulwama, in which 44 CRPF jawans were martyred. In a tweet on February 15, he said, 'Met Rahul Gandhi ji. It was rightly decided that as a mark of respect to the martyred soldiers of Pulwama my joining the Congress will now take place on February 18." "We will be in a state of mourning for 3 days; the country is bigger than a person or party and soldiers are supreme," he said. Kirti Azad is a former Indian cricketer and the MP from Darbangha in Bihar. He was suspended from the BJP for anti-party activities.