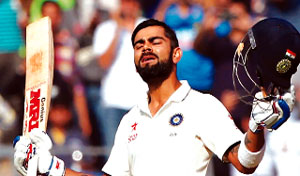 Agencies, Centurion India skipper Virat Kohli on Monday became the fourth fastest batsman to reach the 21-century mark in Test cricket in 109 innings. With this century on the third day of the ongoing second Test of the three-match rubber, the India run-machine also broke his idol Sachin Tendulkar’ record, who had taken 110 innings to reach 21 international tons in the longest format of the game. Australian skipper Steven Smith is the third fastest, who took 105 innings to score 21 Test tons. Former India cricketer Sunil Gavaskar is second on the list while the great Aussie Don Bradman tops the chart, having taken only 56 innings to reach the mark. Kohli, who has featured in 64 Tests till now, has also become the second India captain after Tendulkar to smash a Test ton in South Africa. Earlier, Tendulkar had played a 169-run innings in the CapeTown Test in 1996-97. Earlier in 2017, Kohli, who is regarded as the best batsman of modern day cricket, had equalled Ricky Ponting and Sachin Tendulkar’s record of 11 international hundreds in a year.