Korean giant Samsung has made a niche for itself in India: Modi 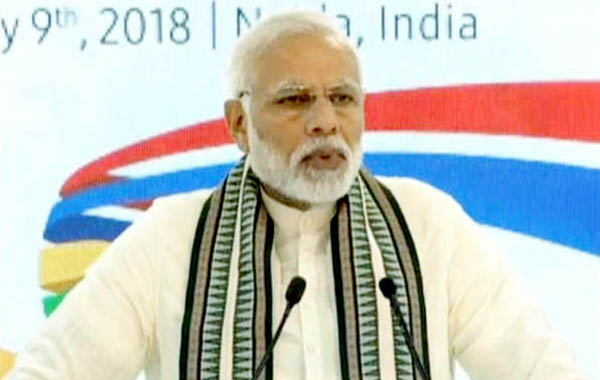 New Delhi, The Korean electronics giant Samsung has made a niche for itself in the Indian market especially by its penetration in the smart phone market, Prime Minister Narendra Modi said on Monday at Noida near here. Addressing a gathering at a Samsung unit in the outskirts of Delhi in the presence of visiting Korean President Moon Jae-in, Prime Minister said: "....there need be no doubt that Samsung has made a special place for itself among Indian consumers especially by its penetration in the Smart Phone Market". "Whenever I interact with business captains, I always say there could be hardly any middle class house which has no Korean product," Prime Minister said. Speaking on the occasion, he also referred to the significance of Digital Technology and maintained how it is making normal life much easier. "In India, we have around 40 crore smart phone users and 32 crore using broadband facilities," Prime Minister said. "In last four years, we have seen emergence of 120 manufacturing units of mobile phones from two. In fact, out of this 50 per cent are in Noida and this has given jobs to four lakh people," he said. Prime Minister's remarks hold significance on their own as the Modi government has come under consistent attack over the issue of joblessness and alleged decline in the country’s manufacturing sector especially due to demonetisation and implementation of the GST. A new 35-acre Samsung Electronics facility will be able to manufacture nearly 120 million mobile phones. The company has recently announced a Rs 5,000 crore investment to expand its India operation and double its production and eye markets in European countries. The new unit with a specific target of boosting manufacturing is expected to give a new vigour to Prime Minister Modi’s ‘Make in India’ initiative and to herald a new wave of job-oriented growth.