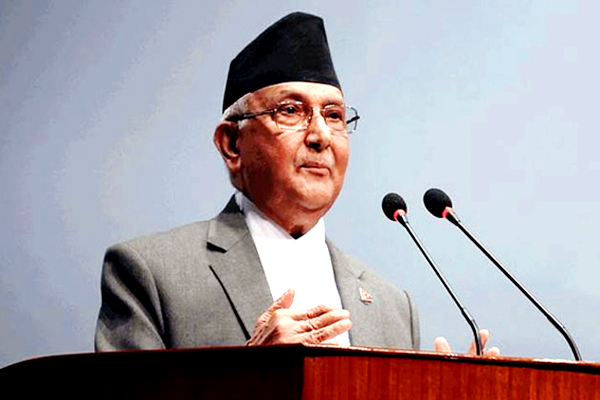 Agencies, Kathmandu KP Sharma Oli on Thursday was sworn in as the 41st Prime Minister of Nepal. This is his second term in the office. The Himalayan Times reported that President Bidya Devi Bhandari administered the oath of office and secrecy to the newly-elected Prime Minister in a function organised at President’s Office, Shital Niwas, in Maharajgunj this evening. Oli was appointed to the top executive post in accordance with Article 76 (2) of the Constitution of Nepal. Oli is the 38th politician to head the government in modern Nepal. President Bhandari appointed KP Sharma Oli to the post this afternoon. CPN-UML Standing Committee, with support from the CPN Maoist Centre, had put forth his name for the top executive position of the country on Wednesday. He is CPN-UML’s fourth leader to take the high office of Prime Minister since 1995. To pave the way for Oli to lead the nation as Prime Minister, a meeting of the UML held in Singhadarbar this afternoon had unanimously appointed him as the Parliamentary Party (PP) leader. Vice President Nanda Bahadur Pun, ministers including Sher Bahadur Deuba, Madhav Kumar Nepal, Jhalanath Khanal, Subhash Nembang, Pushpa Kamal Dahal, Onsari Gharti Magar, Kamal Thapa, ambassadors and other high level officials were present in the swearing-in ceremony. Born to Mohan Prasad Oli and Madhu Oli on February 23, 1952, in Iwa of Terhathum district, CPN-UML Chairman Khadga Prasad Sharma Oli, commonly known as KP Sharma Oli, began his political career in 1966 AD. He became involved in subversive politics and got the membership of the Communist Party of Nepal in January 1970.He was elected a member of the Parliament thrice – in 1991, 1994 and 1999 – from various constituencies of Jhapa district.He was also the Minister for Home Affairs in the Cabinet led by the then UML Chairman Man Mohan Adhikari in 1994. Oli served as the nation’s Deputy Prime Minister and Minister for Foreign Affairs in Girija Prasad Koirala-led interim government formed immediately after the 2006 People’s Movement. The 65-year-old leader was elected Chief of the CPN-UML in July 2014, defeating Madhav Kumar Nepal in the party’s ninth general convention.In 2015, Oli became the 38th Prime Minister of the nation, defeating Nepali Congress the then President Sushil Koirala. After 287 days as top executive of the nation, he had announced resignation in Parliament after CPN Maoist Centre Chair Pusha Kamal Dahal withdrew his support to Oli and joined forces with the then main-opposition Nepali Congress. Dahal and Deuba had jointly brought in a no-confidence motion against Oli with a commitment to pull down the Oli-led government. But, to save himself from further humiliation, Oli announced resignation and paved way for Dahal to become the Prime Minister. However, before the provincial and parliamentary elections, Oli-led party formed an electoral alliance with the CPN Maoist Centre and announced merger after polls to head country towards development.The comfortable majority of the left alliance in the three-tier elections has paved way for KP Sharma Oli to become the 41st Prime Minister of Nepal.