Kriti Sanon to reunite with Pankaj Tripathi in 'Luka Chuppi' 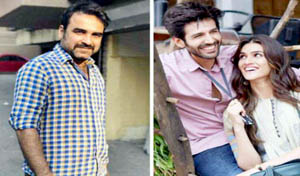 New Delhi, After 'Bareilly ki Barfi', actress Kriti Sanon is set to share the frame with actor Pankaj Tripathi for the second time in 'Luka Chuppi'. In their earlier collaboration 'Bareilly ki Barfi', the chemistry of the duo on screen as father-daughter had received rave reviews. It is enjoyable and comfortable for Kriti to collaborate with someone who understands the craft well. There is a lot of creative exchange between the two. The young actress also confessed she has learned a lot of things from him on set. On working with Pankaj again, Kriti said, "It is a great comforting feeling to reunite with Pankaj Sir. I have learned a lot from him during BKB and we are having a good time shooting together again.' Currently, the duo has begun the first schedule for their upcoming film in Gwalior, Madhya Pradesh.Kriti is on a roll as she shoots for back to back films. The actress recently wrapped the first schedule of Sajid Nadiadwala's 'Housefull 4' in London, where she will be seen alongside Akshay Kumar. Kriti Sanon will also be seen in Diljit Dosanjh's Arjun Patiala apart from her first period war-drama Panipat directed by Ashutosh Gowariker with Arjun Kapoor and Sanjay Dutt.