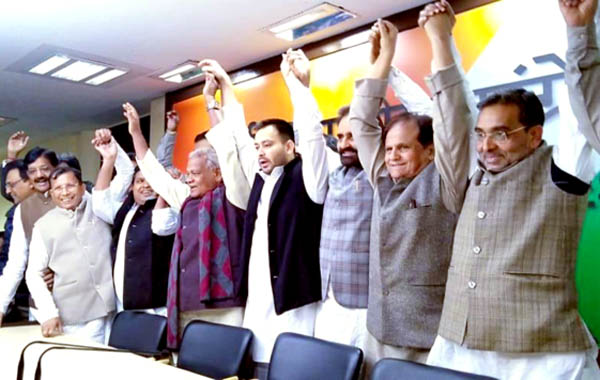 New Delhi, Rashtriya Lok Samta Party (RLSP) president and former Union Minister Upendra Kushwaha, who quit the NDA, on Thursday joined the 'Mahagathbandhan', the grand alliance of opposition parties led by Congress in Bihar. Mr Kushwaha joined the grand alliance in the presence of other ‘mahagathbandhan’ leaders, namely, Hindustani Awam Morcha (HAM) leader Jitan Ram Manjhi, RJD leader Tejashwi Yadav, Congress leader Ahmed Patel, AICC state in-charge Shaktisinh Gohil and opposition leader Sharad Yadav at the AICC headquarters in the national capital. Welcoming him into the alliance, Ahmed Patel of the Congress said "It's a matter of happiness that Upendra Kushwaha is joining the Bihar Mahagathbandhan." Explaining his decision to join the Mahagathbandhan quitting the NDA alliance, Mr Kushwaha said "We had said that we have many options and UPA was one of them. The large-heartedness shown by Congress president Rahul Gandhi and RJD chief Lalu Yadav is one of the reasons I joined Bihar Mahagathbandhan. But the biggest reason I'm here is, the people of Bihar."