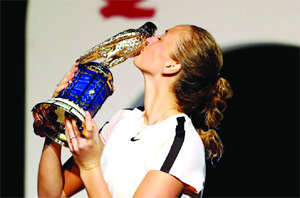 Agencies, Petra Kvitova stormed back into the world top 10 for the first time since 2016 by beating Spain’s Garbine Muguruza in the Qatar Open final on Sunday for her second title of the season. Coming into the tournament 21st in the WTA rankings, the Czech won 3-6 6-3 6-4 in two hours and 16 minutes to add to her triumph in St Petersburg earlier this month. Kvitova was in trouble as she trailed 5-0 in the first set with fourth seed Muguruza looking to snap the Czech’s winning streak at 12 matches. But the double Wimbledon champion dug deep to take the contest into a decider and ground out the victory.Asked how she managed to turn the contest around, Kvitova said: “I have no idea. I just tried... It was a really tough match, a big fight and hopefully the people enjoyed it.” Kvitova was forced to take a break from tennis after being attacked by a knife-wielding intruder at her home in 2016. She returned to action after surgery on her playing hand last year but fell short of the top 10, ending the season 11th. “One year ago I could not dream of it. It’s a very special feeling to be back (in the top 10),” said an emotional Kvitova, who was seeded 16th.