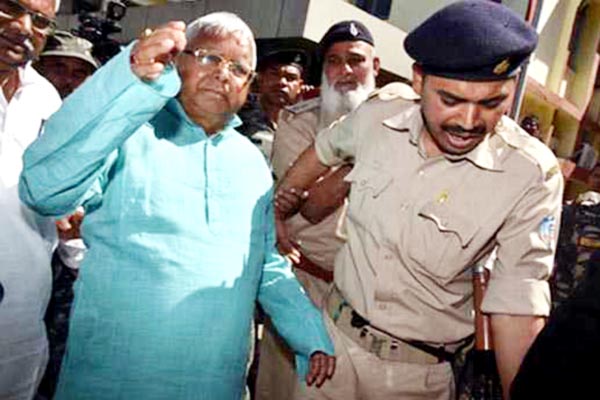 Agencies, Ranchi A special CBI court today convicted former Bihar Chief Minister and RJD supremo Lalu Prasad Yadav in fodder scam case number RC38A/96 which is related to fraudulent withdrawal of Rs 3.76 crore from Dumka treasury of unified Bihar. The court of special CBI judge Shivpal Singh convicted a total of 19 accused in the case including Mr Yadav while 12 others including former Bihar Chief Minister Dr Jaggananth Mishra were acquitted. There were a total of 31 accused in the case. The arguments on quantum of sentencing would be made on March 21, 22, and 23, the judge maintained in his order. Justice Shivpal Singh said that he would be hearing the arguments in the batches of six per day from March 21-23 and award the punishment. In this case the CBI had filed a charge sheet against a total of 49 accused on May 11, 2000. Out of these 49 three became government witnesses out of which one has died, while the higher court quashed the charges against the than Dumka Commissioner S N Dubey in the case while 14 others died during the course of the trial. At the time of announcement of the verdict Mr Lalu Yadav was not present inside the court. He was later brought to the court from RIMS and taken to the court room where the judge informed him about the verdict and also inquired into his health. Following is the list of accused who were held guilty by the court: Ajit Kumar Verma, Arun Kumar Singh, Bimal Kant Das, Gopinath Das, Krishna Kumar Prasad, Manornanjan Prasad, Mahendra Singh Bedi, Nand Kishore Prasad, Naresh Prasad, OP Diwakar, Pankaj Mohan Bhui, Peetambar Jha, Radha Mohan Mandal, Raj Kumar Sharma, Raghunandan Prasad, Rajendra Kumar Bagheria, S K Das, Lalu Yadav and Phool Chand Singh. Following were acquitted by the court: Adhip Chandra Chowdhary, Beik Julius, Benu Jha, Dhruv Bhagat, Dr Jaggannath Mishra, Lal Mohan Prasad, Meherchand Suvarno, Saraswati Chandra, Dr Vidya Sagar Nishad, Jagdish Sharma, Mahesh Prasad and R K Rana.