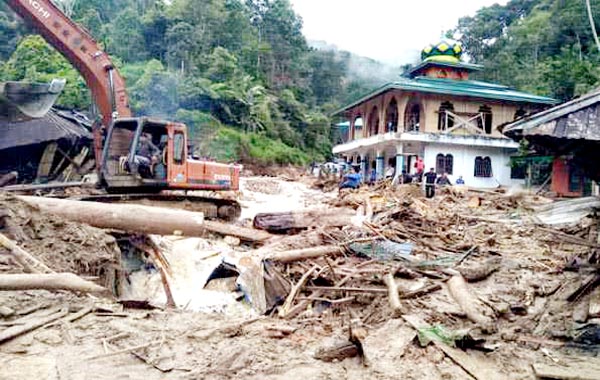 Jakarta, Torrential rains which triggered flash floods and landslides in Indonesia's Sumatra island has left 22 people dead including 11 students of an Islamic boarding school near here in Muara Saladi village of Mandailing Natal district of North Sumatra. The National Disaster Mitigation Agency BNPB said the students died after being hit by falling debris in their classroom as the building collapsed after being engulfed by water on Friday. The provinces of North Sumatra and West Sumatra had been inundated by rain since Thursday, reported QNA. In addition to the 22 dead, BNPB spokesman Sutopo Nugroho said at least 15 people are reported missing and dozens of others have been injured across four districts in the two provinces. "The Aek Saladi river was suddenly overflowing, carrying mudslides, and hit the boarding school. The number of missing could increase as there could be more who have been buried in the mudslides and falling walls," Nugroho said. Search and rescue efforts are under way but mountain and forest areas are hampering the rescue operations.