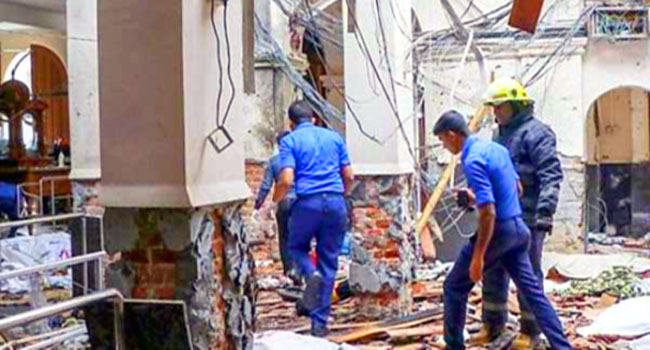 Colombo, The death toll in Sunday's explosions has risen to 290 while the number of injured persons stands at over 500, police said on Monday.Five Indians are among the 290 killed in the terror attack which ripped through through Sri Lanka on Easter Sunday. Police spokesperson SP Ruwan Gunasekara has confirmed that 24 suspects have been so far arrested and investigations were ongoing to nab more suspects. Two of the suspects have been nabbed from Dambulla in the Central Province on Monday morning, the spokesperson said. Sri Lankan Prime Minister Ranil Wickremesinghe said all arrested were local citizens. President Maithripala Sirisena, who was abroad when the attacks happened, has called a meeting of the National Security Council early on Monday. Police investigation into the bombings will examine reports that the intelligence community failed to detect or warn of possible suicide attacks before the violence, according to local media reports. Xinhua while quoting the spokesperson said the islandwide curfew which was imposed indefinitely from Sunday afternoon was lifted on Monday morning and public transport has resumed to normal. However, schools would remain closed on Monday and Tuesday. Security has been beefed up across the country and tight security would remain in place, the police said. People were advised to remain cautious. An improvised pipe bomb was also discovered close to Colombo's main airport, but it was successfully defused by the Sri Lanka airforce, the police said.The "homemade" pipe bomb had been found late Sunday on a road leading towards the main terminal. The attacks started Sunday morning as explosions were reported from the St. Anthony's Church in Kochchikade in capital Colombo and another from the St. Sebastians Church in Negombo, in the outskirts of the capital. A third explosion was reported from the Zion Church in Batticaloa, in the east. Sir Lanka’s bloody 26-year civil war waged between Government forces and Tamil separatists in the north, ended in 2009 with the defeat of the rebels, and in the years since, there has been sporadic violence, some targeting religious minorities. The island is home to around 1.5 million Christians, the vast majority Roman Catholic. The Singhalese majority are Buddhist – around 70 per cent of the population - with sizeable Hindu and Muslim minorites also. Tourists and residents attempting to get in touch with relatives via social media on Monday were unable to do so without a Virtual Private Network (VPN) or a foreign SIM card, after the government ordered a block on social media in the aftermath of the attacks.