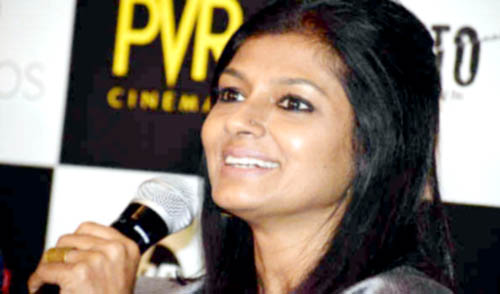 New Delhi, Actress and filmmaker Nandita Das, who is all set to come up with her directorial film 'Manto' starring Nawazuddin Siddiqui, says 'Manto' is a writer who belongs to both India and Pakistan and let's never break him into nationalities. Nandita, who was in the national capital to promote 'Manto' along with the cast Nawazuddin Siddiqui and Rasika Dugal, said she hopes the movie releases in Pakistan. 'I am very keen and hope that it releases in Pakistan. Manto is a writer who belongs to both India and Pakistan. Let's never break him into nationalities. Pakistan is also waiting to see 'Manto',' Nandita said. 'There was a film made on Manto in 2015 in Pakistan, but that had a different treatment and the period they took was also different. So they also want to see how was Manto in Bombay, because that's the portion they haven't seen. Mine is a totally different interpretation and I want people to see it,' she said. Talking about the film, Nandita said, 'Manto is a way, a response for me to portray the truth to society. Manto talks about humanity. It's an inspirational character. We all tried to showcase the reality of Manto, the way he is. This movie was a wonderful experience, I am totally overwhelmed.' Asked if filmmakers are enjoying creative liberties in the present time, Nandita said, 'it's not for us to judge. I am all for freedom. Some good, bad, responsible, irresponsible films will be made, but we had to have that faith that in the test of time, only good work will survive. There are enough constitutional ways of sharing your disagreement of the things you are critical of.' 'Manto' is a biographical drama film about the famous Urdu author Saadat Hasan Manto, written and directed by Nandita Das. The film stars Nawazuddin Siddiqui in the title character of Indo-Pakistani author Saadat Hasan Manto. Rasika Dugal plays the role of Manto's wife, Safia. The flick is based on the 1940's post-Independence period of India.