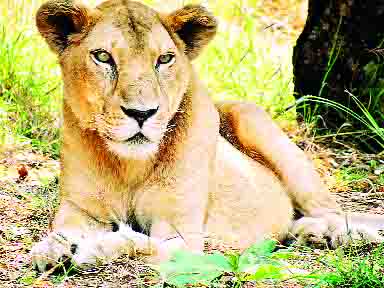 Bhopal,
The tourists visiting Van Vihar always feel there is something lacking. They see a number of wold animals but not lions. Van Vihar management has on Saturday ensured the visitors don’t have to return with this feeling.  Lion Sathya brought from Bilaspur has been released in the display enclosure after 21 days of quarantine. After 4 days of studying her behaviour, lioness Nandi will also be released in the enclosure.
Lions rescued from circus are not displayed

The display enclosure was empty for five years. The Van Vihar has four lions, they could not be released in the display enclosure because of the protocol. All of them have been rescued from the circus. After this, the Van Vihar management had decided to bring a pair of lions from any other zoo. Under this, a pair was brought from Kanan Pendari Zoo in Bilaspur.

In the display enclosure where Satya is kept, the eldest lion was Ramu and his partner Bhavani. Bhavani’s died in February 2015. After that Ramu was removed from the display enclosure and kept in the housing above. The enclosure was empty since then. Ramu died in 2016 when he was 28 years old. He was the oldest lion in the country in captivity. The lion usually lives in the forest between 12 and 15 years. While the lions living in the enclosure live longer.

The management sent a proposal to the Central Zoo Authority to bring lions from Junagadh under the Animal Exchange Program. Under the pressure of the Central Zoo Authority, Junagadh agreed to give the lions but when the Van Vihar team went to see they were found to be old. The team refused to take them.
After completing the norms of 21 days and medical test, pair of lions Satya and Nandi have been shifted to display cage from quarantine at Van Vihar National Park on Saturday. The park management has conducted medical test of lion and lioness on February 6 and 7.

Both lions were found fit in the medical test after which officials shifting process was given final nod. Earlier, both lions were in a quarantine enclosure where they were adjusted well. The pair of lion has been brought to the park to re-start the breeding project. A few more lions will be brought to the park after a few days as these two lions are siblings and they cannot mate.

A K Jain, Deputy Director of Van Vihar, said that it is guidelines of NTCA to keep animal in quarantine at least for 21 days after translocation. He said that doctors of the park have conducted medical test of lions in which they have been found to be fit for the shifting to cage. It would take two-three days to adjust the new cage from quarantine. He said officials are trying to bring another pair of lion from Indore and Junagarh to start the breeding programme.

The pair of lions was brought to the park on January 16 from Kanan Pendari Zoo, Bilaspur. Officials including Van Vihar Director Kamalika Mohanty and wildlife veterinary doctor Atul Gupta have visited Nandan Kanan Zoo at Bilaspur to see the pair of lion. The two lion Satya (male) and Nandi (female) are four years old.

Officials of Van Vihar informed that both lions belong to the same mother lioness Varsha. Currently, Van Vihar has three lions and all of them have completed their average life tenure. There are two male Montu and Lamba and one female Varu. On April 15, 2017, Van Vihar brought four lions from Assam in which female lion Vrinda died.