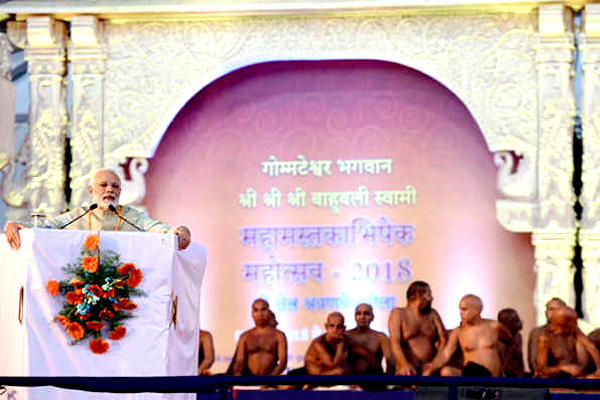 Shravanabelagola,[/caption] Prime Minister Narendra Modi on Monday said that the Indian history had ample evidences on emergence of social reformers or saints like Lord Bahubali when ever society changes its path to worse. Speaking after inaugurating newly carved 630 steps on Vindiyagiri hill on which the 58.8 feet tall monolithic statue of Gommateshwara stands and Bahubali General Hospital as part of 88th Mahamasthakabhisheka here, he said Bahubali, himself offered a thrilling tale of a person who advocated 'peace from sacrifice and happiness from nonviolence'. He was one of the best social reformers the ancient India had witnessed and took people who were obsessed in violence in the right direction by propagating non violence. 'Such persons inspire people and places where they are born become destination for millions of people who seek solace from earthly sufferings. 'I am blessed to be in this place, that too during a 'Mahaparva' like Mahamasthabhisheka which happens once in 12 years. He appreciated the services of Jain Math in Karnataka which had been known for taking various social initiatives and the general hospital inaugurated by him will go a long way in service of the poor. Such organisations also inspire others in promoting education and health and strive for a better society by removing its 'nashas' (evils). 'Such thinking also inspired the BJP-led NDA government which had launched the world's largest health schemes for the poor by introducing Universal Health Scheme 'Ayushman Bharath' that benefits 50 crore people among poor and middle class. Any poor family can now be sure of good and quality healthcare and avail insurance benefits of up to Rs 5 lakh per annum,' he said. He said his government had taken oath to work for the benefit of the society and help the poor. I was taking meaningful steps and one of such big step was the health scheme.