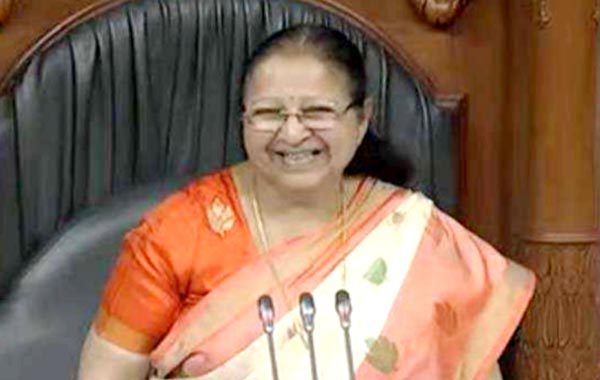 New Delhi, The much eventful Monsoon session of Parliament came to an end on Friday with Lok Sabha Speaker Sumitra Mahajan stating that the proceedings in the House were productive. In her valedictory address to the House, she said while members functioned additional 20 hours and 43 minutes to transact important business, as many as eight hours and 26 minutes were lost due to disruption. The Speaker said it was a matter of satisfaction that this session turned out to be more productive than the two previous sessions. Twenty Bills were introduced and 21 draft laws were passed, she said.She said members took keen interest in the House proceedings and over 500 issues were raised during Zero Hour.As many as 128 Private Members' Bills were introduced and re-introduced during the session.She said the House had 17 sittings and functioned for 112 hours. Prime Minister Narendra Modi was present in the House among others during the valedictory session. The Speaker said among other issues the House also held short duration discussion on flood and drought.Ms Mahajan conveyed her Independence Day good wishes to the members and also to the country. Important Bills passed by the Lower House of Parliament during the session included GST Bills, SC ST Prevention of Atrocities Act, a Bill that gave constitutional status to the OBC panel and The Fugitive Economic Offenders Bill. She said written reply to as many as 4,140 unstarred questions were tabled during the session, which got underway on July 18. Oral replies were given by ministers to 75 starred questions. The Speaker also said the House took up key businesses like passing the Demands for Excess Grants for 2015-16 and Supplementary Demands for Grants for Fiscal 2018-19. The House also passed The Criminal Law (Amendment) Bill, which seeks to make rape below the age of 12 years punishable with death, and the National Sports University Bill.