LS adjourned twice during debate on 'No Confidence Motion' 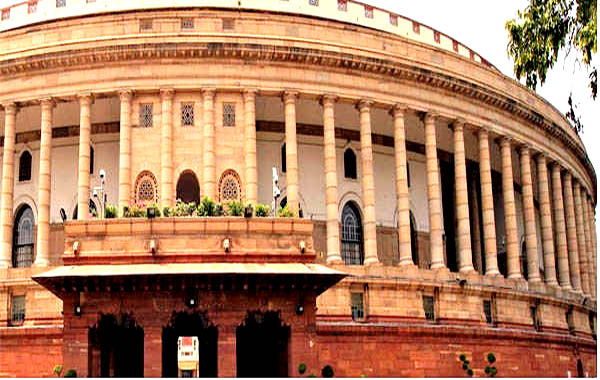 New Delhi, The Lok Sabha was adjourned twice during the debate on No Confidence motion on Friday as the agitated Telugu Desam Party trooped into the Well demanding discussion on Andhra Pradesh. For the first time it was adjourned for about five minutes after ruckus over Congress president Rahul Gandhi’s remarks and for about 10 minutes the second time when TDP members gathered in the Well demanding discussion on the issues related to Andhra Pradesh. The second adjournment took place when Home Minister Rajnath Singh during his intervention during the debate, mentioned the issue of demonetisation. TDP members demanded that the issues related to Andhra Pradesh be discussed first. When the Home Minister continued to speak on the other subjects, TDP members created ruckus in the House. Some members from the treasury benches tried to pacify the TDP member but to no avail. Speaker Sumitra Mahajan tried to pacify them and then was forced to adjourn the House for 10 minutes. Earlier, TDP members had tried to stop the Home Minister on the same issue but returned to their places after persuasion by treasury members. The House was adjourned for the first time for about five minutes after BJP and Congress members clashed over remarks from Congress president Rahul Gandhi. During the high-decibel debate on the first No-Trust Motion, Mr Gandhi lashed out at the BJP led government and especially singled out Prime Minister Narendra Modi and said his (Rahul) observation on Rafale fighter jet deal has almost silenced Mr Modi and 'he cannot see eye to eye with me'. Mr Gandhi's participation in the debate was marred by regular noisy protests from the treasury bench including Defence Minister Nirmala Sitharaman and several of her colleagues. The Congress president charged that Ms Sitharaman had earlier misled the country by stating that the details of the deal with French government could not be shared because it was part of a secret pact.