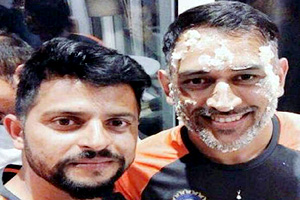 New Delhi, ‘Captain Cool’ aka former Indian skipper Mahendra Singh Dhoni on Saturday turned 37, and birthday wishes poured in for him not just from the cricket fraternity but also from the Bollywood. On Friday, Dhoni took field in the second T20I against England and achieved the milestone of appearing in 500 international matches - - the third Indian after Sachin Tendulkar and Rahul Dravid. Dhoni celebrated his birthday with his wife Sakshi and daughter Ziva and was joined by India teammates as he cut the cake. Bollywood actor and India captain Virat Kohli’s wife Anushka Sharma was also present for Dhoni’s birthday celebrations.Bollywood celebrities took to Twitter and wished Dhoni on his birthday. Veteran actor Anil Kapoor wished Dhoni success and said, “Happy Birthday, @msdhoni!! May you always succeed on & off the field!” Anupam Kher wished him love and happiness. “Dearest @msdhoni!!! Happy birthday. You and your cricket has given every Indian millions of proud moments. May all your dreams come true. Wishing you all the happiness in the world,” Anupam said in a tweet. Singer Armaan Malik said, “#MsDhoniTheUntoldStory had some of my biggest songs till date and I couldn’t be happier than to be the voice of our amazing captain cool @msdhoni Lots of love & respect to you sir and wishing you a very happy birthday #HappyBirthdayMSDhoni.” Singer Amaal Mallik said, “Happy birthday to @msdhoni, the captain of our hearts, Here’s wishing you an amazing year....Full of Sixes.It was truly an honour for me & @manojmuntashir to score your biopic #MsDhoniTheUntoldStory.The most loved soundtrack of my life. Lots Of Love & Respect.” Singer Palak Muchhal said, “Wishing one of the most amazing human beings I know, someone whose determination, focus, patience, perseverance and humility inspire me, my most favorite #MahendraSinghDhoni a super Happy and Blessed Birthday!!!@msdhoni @SaakshiSRawat.” Actress Soundarya Sharma posted a picture of her and Dhoni and captioned it, “Wish you a very Happie Birthday @msdhoni You made us believe in Cricket Heartbeat of millions. Stay blessed!” Devotional singer Anup Jalota also extended his greetings to Dhoni. “The cricketer who turned up the game of Indian Cricket and became an inspiration to millions with his life story and sportsmanship. Happy Birthday Mahendra Singh Dhoni Ji!@msdhoni #HappyBirthdayMSDhoni,” Jalota said. Actress Urvashi Rautela said, “Here is wishing @msdhoni a happy birthday to the man who has brought unparalleled happiness to every Indian cricket fan with his helicopter shots, unmissable stumpings & incredible leadership skills. #HappyBirthdayMSDhoni @msdhoni #MSDhoni #ITSpecial.” Actress Sonali Kulkarni said, “Happy Birthday my biggest star @msdhoni.You are the epitome of passion, game, focus, ease, fitness and leadership Keep inspiring my best wishes are always with you n your loved ones MSD love!!! #HappyBirthdayMSDhoni.” Actor Karanvir Bohra said, “happy happy birthday the shine of India @msdhoni.” Dhoni, who made his international debut in 2004 in an ODI against Bangladesh, has so far played 500 international matches for India.