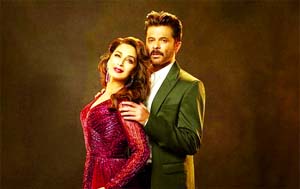 One of the most popular silver screen pair of the 90s, Madhuri Dixit and Anil Kapoor have reunited after 19 years for Indra Kumar’s adventure comedy, ‘Total Dhamaal’. The iconic couple has had a tremendous run at the box office with most of their films being hits or blockbusters, like Tezaab, Ram Lakhan, and many others. Anil Kapoor also took the new to Instagram and wrote, “How I love the first day of shoot! #TotalDhamaal begins today! @madhuridixitnene #IndraKumar & I are working together after 26 years but the energy and vibe is the same as it was during #Beta! It’s going to be an epic ride! Let’s get the camera rolling! ?#ADFflims @foxstarhindi.” According to reports, the pair has begun with shooting for the highly anticipated film at Bandra’s Mehboob Studios and the entire team has been buzzing with the energy of the two. The duo has always shared a crackling chemistry that made the entire shooting process a whole lot smoother, say sources. A source said, “Anil Kapoor & Madhuri Dixit have known each other for years and the camaraderie they share off screen reflected on screen as well. It may have been 26 years since Indra Kumar’s ‘Beta’ but it felt as though time has stood still for the pair. The DOP of the film is Japanese and she is in awe of how the couple look so radiant in every close up. A couple of sequences were meant to be shot in the course of six days, but because of the comfort they share, it was wrapped up in 4 days. It was amazing for the team to watch them shoot together.” “Both are extremely homely people, their lives center around their families. They work, go home, sleep early and wake up early, and it reflects on their faces. In fact, Madhuri pulled off the jhatkas and matkas with effortless ease, leaving everyone mesmerized,” added the source. Always known to create magic over the silver screen, the two are touted to do the same with this highly anticipated film.