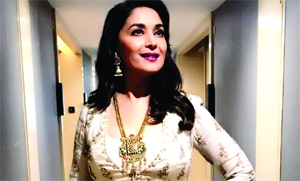 Actress Madhuri Dixit-Nene, who celebrated her New Year in Tokyo, got a chance to try the Samurai headgear during her visit to a museum.Madhuri shared a photograph of herself wearing the headgear on Twitter on Wednesday. “Tried the Samurai headgear (weighs a ton) and sword. All the warriors all over the world must have been so strong to wear such heavy gear, ride their horses and fight with heavy swords. Respect! Salute! Samurai diaries,” Madhuri wrote alongside the image.Madhuri was last seen on-screen in 2014 film “Gulaab Gang”.