Mahabhiyan for water conservation and promotion with public support: Chouhan 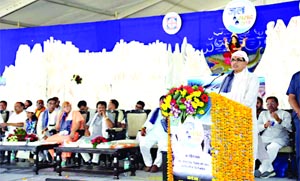 Chronicle Reporter, Bhopal Chief Minister Shivraj Singh Chouhan said that the ground water level is constantly declining. In order to prevent this, a mahabhiyan will be started in the state with the help of mass support for water conservation. Old ponds and rivers will be deepened. Also, new ponds will be constructed with funds of Rs 500 crores. Tree plantation campaign will start from July 15 this year. Chouhan called upon the entire society to join this great work. Chief Minister Chouhan was addressing the Jal-Sansad organized at Eintkhedi Chhap in Sehore district today. He also started the shramdan for deepening of Kolans river. He also motivated the people to offer shramdan by offering shramdan himself. Chouhan said that natural resources are being blindly exploited by humans for industrialization and materialism. This has led to many natural disasters. Blind felling of trees has led to scanty and irregular rainfall. Today the environment is deteriorating, the rivers are drying up and surface water is continuously decreasing. The Earth is in the grip of drought. The temperature of the surface of the earth is constantly increasing, which will increase up to 2 degree Celsius by 2050. This will cause the glaciers to melt and the sea level will increase, causing flood and related problems. Chouhan said that the whole country and the world is facing these problems. Why these problems have surfaced is a matter of concern for everyone. If we do not become alert now, then there will be a great crisis for generations to come. This land is for humans as well as for plants and animals. He said that natural resources should not be exploited. The trees absorb rain water so that the ground water level increases. The Chief Minister said that rivers are the basis of life. Human civilization has developed on the banks of rivers. Our goal is to protect the environment and preserve natural resources. The upcoming grand tree plantation campaign will commence from July 15 to August 30. He said that the work of constructing check dams, Boribandhan and construction of ponds will be started. He said that steps will be taken to stop the village water in the village itself. All voluntary organizations and people should cooperate in this campaign. He made it clear that there are hindrances whenever any big work is being carried out. Do not worry about what people will say. This work cannot be done by only the government; the support of the entire society is needed. He appealed to all to take part in this pious work. The Chief Minister lauded the shramdan started for the deepening of rivers of all 313 blocks by the Jan-Abhiyan Parishad for water conservation. Chouhan said that the Narmada Seva Yatra taken out last year has increased awareness of the people towards rivers. Now people refrain from flowing contaminated water in rivers. Visarjan-kund, pujan-kund, toilets and Mukti-Dham have been made on the banks of the river. Alcohol shops have also been removed from the coastal areas. More than 6 crore saplings were planted by 35 lakh people last year on July 2, on the banks of river Narmada. He also made people resolve to conserve the environment and protect the rivers. At the same time, he also offered shramdan under the scorching sun at the Kolans River. Vice president of the Jan-Abhiyan Parishad Dr. Pradeep Pandey said that from today the people’s campaign for deepening of the river is being started which will continue in 313 blocks of the state for the next two months. Speaking on the occasion, Swami Akhileshwaranand, Chairman of Gau-Sanvardhan Board said that Indian culture is very generous. In it, all living beings, jad-chetan is considered as consciousness. India is a vibrant consciousness in which nature has been given total respect. Life is not possible without water; hence we must protect roots, living beings and water. MLA Rameshwar Sharma has said that Bhopal’s upper lake gets filled from Kolans water. He also praised Jan-Abhiyan Parishad for the river deepening work. The Chief Minister lauded the Jan-Abhiyan Parishad for the pond deepening work. The Chief Minister reviewed the exhibition organized by the Jan-Abhiyan Parishad. MP Alok Sanjar, Bhopal Mayor Alok Sharma, Chairman of Madhya Pradesh Mineral Development Corporation Shiv Choubey, Vice President of Jan Abhiyan Parishad Raghavendra Gautam, District Panchayat Presdident Manmohan Nagar, public representatives and a large number of people were present on the occasion.