Mahashivratri to be celebrated with religious fervour today 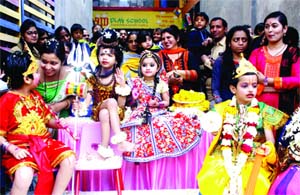 Chronicle Reporter, Bhopal The Mahashivratri will be celebrated with religious fervour and enthusiasm on Wednesday. The city temples are decked up to celebrate the festival and devotees of Lord Shiva will throng the temples from morning. Temples are preparing to welcome throngs of devotees through the intervening night of Wednesday-Thursday. Temples in the city and surrounding areas, especially the historic Bhojpur Temple, are all set to receive lakhs of devotees on Shivratri. In the city, innumerable Shiv temples are gearing up for daylong queues that stretch late into the night as Shiv worship becomes intense during the five prahars of Shivratri. The rituals ideally begin after sunset and go on the entire night, when the devout offer abhishek with milk, water and honey. Shivbhakts from all parts of the city travel to nearby Bhojpur Mandir. Large rangolis and strings of floral garlands welcome worshippers, who bring milk for abhishek, apart from offerings of flowers, bel fruit, belpatra and datura. Mahashivratri is special to music and dance professionals given that Lord Shiva as Natraj is the patron deity of dance. Devotees worship Lord Shiva with puja and offerings of dance at Mahashivratri. In the city, all the temples, especially those devoted to Lord Shiva, see huge crowds. The special ‘sringar’ of Shiva and Parvati has been done at Dadaji Dham Mandir at Patel Nagar. The ‘Shiv Barat’ will reach the temple in the evening. Large number of devotees will participate enthusiastically in the Shiv Barat.The special ‘rudrabhishek’ of Lord Shiva will be performed. The Great Night of Lord Shiva marks the divine convergence of Shiva and Shakti. It is also believed that on this day Lord Shiva was married to goddess Parvati. Some, however, believe that on this day lord Shiva performed the sacred dance form Tandav. On this day, devotees of lord Shiva do fasting (vrat) and perform puja. All the devotees chant ‘om namah shivay’ while performing various rituals during puja. Chanting the ‘Mahamritunjaya’ mantra is of great significance on this day. The festival is principally celebrated by offerings of bel patra/Bilva leaves to Shiva. After that devotees offer fruits which is conducive to longevity and gratification of desires. Thereafter burning incense sticks yields wealth. Lastly betel leaves are offered to mark satisfaction of worldly desires. Devotees believe that sincere observance of Shivratri puja and all night worship of lord Shiva will absolve them of all their sins and liberate them from the cycles of birth and death. Hindu women wait for this festival. It is believed that women, married or unmarried who perform puja with great devotion and faith get good husbands, marital bliss and a long and prosperous married life since goddess Parvati is also known as ‘gurua’ the giver of suhag. Hence, one can see women enthusiastically observing the fast and dedicatedly performing the rituals. Mahashivratri is very popular with ascetics since lord Shiva is also regarded as an ascetic god. A drink made with bhang (cannabis), milk and almonds – known as ‘thandai’- is essentially drunk by some devotees on this day because cannabis is considered to be very dear to Lord Shiva.