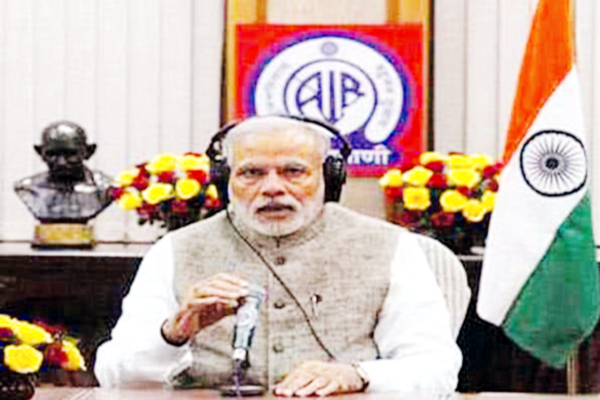 Agencies, New Delhi Prime Minister Narendra Modi on Sunday urged citizens to give due importance to water conservation and make it a collective responsibility, while pointing out that India’s forefathers had successfully made water conservation “a way of life for centuries together”. “Do we not feel that water conservation must be a social responsibility? This must be a collective responsibility. How can we conserve each and every drop of rain water?,” the Prime Minister said in his monthly Mann-Ki-Baat radio broadcast over the All India Radio. Pointing out that water conservation is not a new topic for Indians, he said “Our forefathers have lived this as a way of life for centuries together. They gave due priority and importance to each drop of water. They found out newer methods, in order to conserve every single drop of water”. In this context, he mentioned about several bawdis (stepwells) in various states, including Gujarat and Rajasthan and said, “Those of you who might be getting a chance to visit Tamil Nadu might have noticed that in some temples in the state, there are carvings on stone depicting irrigation system, water conservation methods and drought management. There are vast stone inscriptions in these temples and devotees get a chance to read these educative messages”. He said in Mannarkovil, Chiran Mahadevi, Kovilpatti and Pudukottai – there are massive stone inscriptions to this effect. “Several bawdis (stepwells) are famous as tourist spots, but please do not forget that these are the living symbols of water conservation campaigns, which our forefathers had accomplished,” Mr Modi said. The Prime Minister said Adalaj and Patan Ki Raniki Vaav (Baodi) in Gujarat is a UNESCO World Heritage site. Similarly, he referred to Chand Bawdi in Rajasthan. “This is one of the biggest and the most beautiful bawdis of India and the point to be noted is that this is situated in a water-scarce area,” he noted.Mr Modi said the months of April, May, June and July are the most suitable time, when rain water harvesting can be done. “Budget under the MGNREGA is also utilised for this water conservation activity. During the last three years, everyone in his or her own way has contributed towards water conservation and water management,” he said, adding that an average of Rs 32,000 crore have been spent besides the MGNREGA budget each year on water conservation and water management. “In the last three years, nearly 150 lakh hectares of land got more benefit through water conservation and water management measures. Some people have really benefitted very well from MGNREGA budget provisions made by the Government of India for water conservation and water management works,” he said and also referred to the project of reviving the rivers, which had dried out in Kerala. “Seven thousand workers under the MGNREGA worked very hard for 70 days and finally succeeded in reviving Kuttumperoor river there,” he claimed. The Prime Minister said while the Ganges and the Yamuna have plentiful of water, but there are many other places in Uttar Pradesh like Fatehpur district, where two small rivers namely Sasur-Khaderi had dried. “After receiving the reports of Remote Sensing Imagery and Inter Department Coordination, the district administration took up the responsibility of soil and water conservation on a massive scale,” he said.