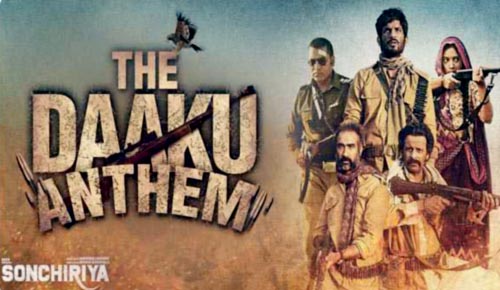 New Delhi, The rebels of 'Sonchiriya' on Thursday released a new song 'The Daaku Anthem'. The song is written and sung by Abhishek Nailwal and is composed by Ketan Sodha. 'The Daaku Anthem' has a catchy tune which just blends into our mind and stays. The RSVP movies posted a video on their social media accounts and captioned,"Baaghi tera kaam, darr mitti mein mila de! #TheDaakuAnthem out now: http:it.ly/TheDaakuAnthem@itsSSR @bhumipednekar @BajpayeeManoj @RanvirShorey @ranaashutosh10 #AbhishekChaubey @RonnieScrewvala @ZeeMusicCompany #Sonchiriya". The movie showcases the rebellious life around the state of Madhya Pradesh. 'Sonchiriya' has Lakhna played by Sushant Singh Rajput in the film has somewhat of a conventional hero arc whereas Manoj Bajpayee is playing the role of Maan Singh leader of the gang, Ranvir Shorey who is a close ally of Maan Singh, Bhumi Pednekar Indumati Tomar puts up a fierce fight and Vakil Singh Ashutosh Rana a ruthless police officer. 'Sonchiriya' is all set to release in the upcoming month.The cast and crew are on a promotional spree and are promoting the film on social media as well as through events and promotional activities. Directed by Abhishek Chaubey who has earlier presented 'Udta Punjab' and 'Ishiqiya', 'Sonchiriya' presents a rooted tale set in Chambal. Produced by Ronnie Screwvala's RSVP, the movie is slated to release on March 1.