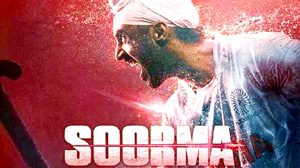 New Delhi, Bollywood is all set to witness yet another inspiring story of a national hero with 'Soorma' -- a biopic on Hockey legend Sandeep Singh. Ahead of the film's release, legendary hockey player Sandeep Singh addressed his life story at TedX MICA. Sandeep, regarded as one of the world's most dangerous drag-flickers with drag speeds of over 145 km/hr which led to his nickname, ‘Flicker Singh’. Proud makers SPN Production and actress-turned-producer Chitrangada Singh too took social media to share Sandeep's inspiring TedX MICA 's speech. Sandeep's speech is about his life journey and how even after being shot by a bullet on his waist he managed to recover and made India proud by winning several matches. Sandeep in-depth spoke about how he started playing the game and how one day everything changed his life. He shared his experience of getting shot by a gun while traveling to Delhi after which even the doctors said he won't be able to walk again on his feet, but being fighter to the core, Sandeep did not give up and continued his hard work on the turf. Sony Pictures Production shared the video and captioned it, " Being a #Soorma is about getting up and moving forward, no matter how hard you get knocked down! Hear it from @Flicker_Singh, at @TEDxMICA. #DontLetThisStoryPass @diljitdosanjh @taapsee @Imangadbedi @IChitrangda @SnehaRajani @shaadesh @OfficialCSFilms." Chitrangda retweeted the inspiring video and wrote, " Sometimes it’s God .. sometimes it’s also a lot of courage ! @Flicker_Singh" Makers are all ready to bring his story to the big screen which would be yet another story of an underdog.Inline with the TedX Sandeep was also a guest speaker at Cambridge University and Warwick University in England. The drag-flickers journey – of wins, losses, life, and death – will soon be seen on-screen in Soorma, a Shaad Ali directorial, starring Diljit Dosanjh and Taapsee Pannu.'Soorma' is produced by Sony Pictures Networks Productions, Chitrangada Singh, and Deepak Singh which will release on July 13.