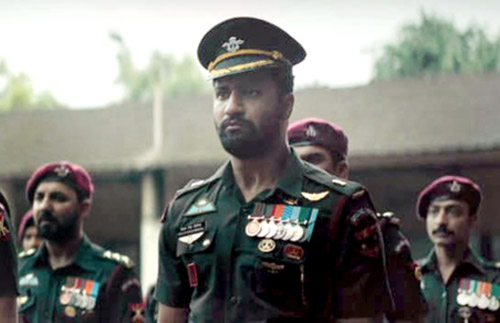 New Delhi, With nine days left for the release of the much anticipated movie 'URI', the makers have shared a video which is high on energy.The video showcases Vicky Kaushal in top form as an army officer, who is leading a team to avenge the deaths of his comrades. Taking to micro-blogging site Twitter, RSVP Movies shared the video saying,'Yeh jang humne shuru nahi ki thi, magar isse khatam ab hum hi karenge. #HowsTheJosh #URITheSurgicalStrike #URIJan11 #URI2019 #URIin9Days'. The film based on the 2016 Indian Army's surgical strikes on Pakistan as a retaliation for the Uri attack, will have real-life footage which showcases what really happened during the military operation that was carried out by the Indian army two years ago. The trailer which has been creating buzz for over a while now has struck cords with Indian armed forces who have gone ahead to appreciate the contents released so far. Showcasing the story of the night that shook the entire nation, the units and short promos released by the makers showcase the dangerous operation initiated by the Indian Army in retaliation of the terrorist attack by Pakistanis in URI which killed 19 Indian soldiers. The video gives insights into the Indian Army’s invasion into the Pakistan territory to avenge the deaths of the soldiers. Starring Vicky Kaushal in the lead role with his first action-packed film, the movie also boasts of an ensemble cast, including Mohit Raina, Paresh Rawal, Yami Gautam, and Kirti Kulhari amongst others. Produced by RSVP movies and directed by Aditya Dhar, the film is slated to release on January 11.