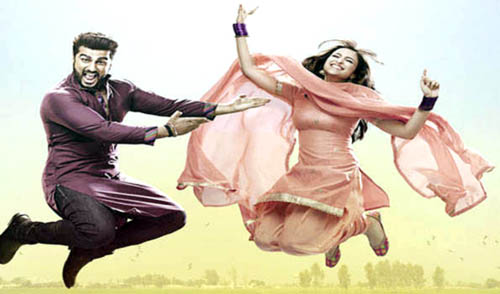 New Delhi, Arjun Kapoor and Parineeti Chopra starrer 'Namaste England' dropped another poster from the movie revealing their fun side from the movie. The new poster showcases a goofy Parineeti and Arjun having the best of their happy times. Both the actors are seen donning traditional attire with the backdrop of a countryside in the latest poster. Parineeti is seen donning a salwar kameez, whereas Arjun is seen in kurta pajama.The new poster also comes with the release date of the trailer. Arjun Kapoor took to Twitter to share the new poster. He said, "Guesswork ends. Excitement begins. #NamasteEnglandTrailer out tomorrow." Parineeti Chopra also shared by saying."So nervous I could cry!!!! TRAILER OUT TOMORROW. 6th SEPTEMBER!! Baba bachaooooo." Vipul Amrutlal Shah's 'Namaste England' is a young and refreshing story that traces the journey of two individuals Jasmeet and Param. It tracks their love story across the landscapes of India and Europe. Starting from Punjab and moving to Ludhiana, Amritsar, Dhaka and all the way to Paris followed by Brussels and finally to London. It's a fun quintessential Bollywood film starring Arjun and Parineeti. Produced and directed by Vipul Amrutlal Shah, the film is presented by Pen Movies and Reliance Entertainment in association with Blockbuster Movie Entertainers.