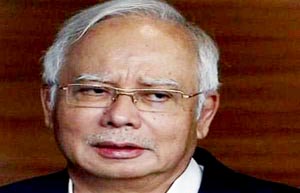 Kuala Lumpur, Former Malaysian Prime Minister Najib Razak has been charged with three counts of money laundering linked to a multi-million dollar corruption scandal, said a BBC News report on Wednesday. His is accused of having received 42m ringgit ($10m; £8m) from state fund 1MDB in his personal bank account.Mr Najib was arrested in July and has already been charged with breach of trust and abusing his position. The new investigation into 1MDB began after his shock election loss in May.He has always denied any guilt and had been cleared by Malaysian authorities while in power. Mr Najib, members of his family and several allies are accused of embezzling huge sums allegedly used to buy everything from artwork to high-end real estate around the globe. The allegations played a central role in his defeat to a reformist alliance led by 93-year old political veteran Mahathir Mohamad. Raids have been carried out in recent weeks at properties linked to Mr Najib and his wife. Police say the seizure of valuables - including designer handbags, jewellery and cash - was the biggest in Malaysian history.1MDB, set up by Mr Najib in 2009, was meant to turn the capital, Kuala Lumpur, into a financial hub and boost the economy through strategic investments. It started to attract negative attention in early 2015 after it missed payments for some of the $11bn it owed to banks and bondholders. Then the Wall Street Journal reported it had seen a paper trail that allegedly traced close to $700m from the fund to Mr Najib's personal bank accounts.Billions of dollars are still unaccounted for.