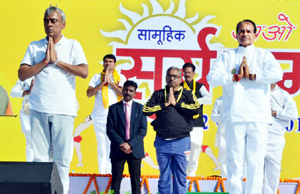 Agencies, Geneva The United Nations' World Food Programme (WFP) said on Tuesday that malnutrition amongst children in India remained high despite progress made in food security and if current trends continued, 31 per cent of children would be stunted in 2022. During UN Geneva regular press briefing on Tuesday, Herve Verhoosel, senior spokesperson for the UN World Food Programme, said that the latest findings from the joint WFP-Government of India 2019 Nutrition Security Analysis Report indicated that despite positive trends and patterns in improving food security, malnutrition rates were well below acceptable levels, with large number of people, especially women and children, suffering from micronutrient -- Vitamin A, iron and iodine -- deficiency. "Today, I would like to highlight the newly released findings of the 2019 National food and Nutrition Security Analysis report, developed in partnership between the UN World Food Programme and the Government of India's Ministry of Statistics and Programme Implementation. "The report is a first of its kind baseline analysis of the progress towards achieving Sustainable Development Goal 2: Zero Hunger, in India. India's progress towards this sustainable development goal -- with an overall population of 1.32 billion -- will have a critical impact on the overall global success of reaching zero hunger," Verhoosel said. Quoting from the report he said during the last decade stunting has declined by one fifth in India with an annual decline of around one per cent. This is still the slowest rate of decline amongst other emerging economies and most countries in Asia. With a current stunting rate of over 30 per cent across all states in India except for Kerala -- which has already reached the target -- the government of India will have to double its rate of decline to 2 per cent per year to meet the national targets of 25 per cent by 2022. "With the current rate of reduction of 1 per cent, 31.4 per cent of children will be stunted in 2022," he warned. "Among the poorest 30 per cent of the population, the average per capita consumption of energy is 1811 kilo calorie per day, which is much lower than the Indian Council of Medical Research norm of 2,155 kilocalories per day," he stated, adding that 6.4 per cent of children under five were both stunted and wasted and also were underweight, while 18.1 per cent of children were both stunted and underweight and 7.9 per cent of children were both wasted and underweight. "Despite India becoming self-sufficient in foodgrain production with a large increase in the production of rice, wheat and other cereals, the per capita availability of these grains has not increased at the same level due to inequality, population growth, food wastage and losses, and exports, said the senior spokesperson for the WFP. He said the prevalence of malnutrition in children 6-59 months in India has declined between 2005-06 to 2015-16 with chronic malnutrition, or stunting, decreasing from 48.0 per cent in 2005-06 to 38.4 per cent in 2015-16 and underweight decreasing from 42.5 per cent in 2005-06 to 35.7 per cent in 2015-16. The prevalence of acute malnutrition, or wasting, has marginally increased during the same period, from 19.8 per cent to 21.0 per cent. Verhoosel said under-nutrition is becoming more prominent and poses a new challenge for India. From 2005 to 2016, prevalence of low (< 18.5 kg/m2) body mass index (BMI) in Indian women decreased from 36 per cent to 23 per cent and from 34 per cent to 20 per cent among Indian men. However, during the same period, the prevalence of overweight/obesity (BMI > 30 kg/m2) increased from 13 per cent to 21 per cent among women and from 9 per cent to 19 per cent. Children born to women with low BMI are more likely to be stunted, wasted, and underweight compared to children born to women with normal or high BMI. He informed that the future joint reports between WFP and the Government of India were also planned which would analyse progress towards reaching Sustainable Development Goal 2 at the sub-national and district level. "Country capacity strengthening is a major priority for WFP in India, where to-date our teams have been providing technical assistance for improved efficiency and effectiveness of the government's food-based safety nets," he concluded.