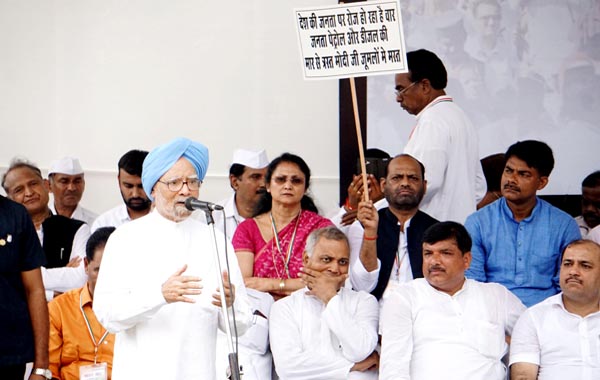 New Delhi, Lashing out at the Narendra Modi government, former prime minister Dr Manmohan Singh on Monday called for a united opposition and added that the time will come very soon to change the government. Addressing the gathering at Ramlila Maidan as opposition parties observes Bharat Bandh against rising fuel price and essential commodities, Dr Singh said that under Modi government, “public is tired and angry, farmers and small traders are upset and country’s youth is disturbed without jobs”. “Political parties should keep aside their minor differences and work together to fight the BJP government. This government claims it has done a lot for the nation, but none of it is in the interest of the nation. This government has crossed all limits”, said Dr Singh. Dr Singh further said that Modi government has failed immensely and this is the question of the survival of India and her citizens. “We should be ready to protect our democracy. The time will come very soon to change the government. Media should also fulfill its responsibility”, he said. The former prime minister, along with UPA chairperson Sonia Gandhi, Congress President Rahul Gandhi, NCP supremo Sharad Pawar, Loktantrik Janata Dal leader Sharad Yadav, AAP leader Sanjay Singh, RJD leader Sanjay Jha, JD(S) leader Danish Ali and many other leaders joined the protest at Ramlila Maidan. Earlier, Opposition leaders led by Rahul Gandhi paid tribute to the father of the nation Mahatma Gandhi at Rajghat and marched to Ramlila Maidan. A total of 20 opposition parties are supporting the Bharat Bandh called by the Congress. The Congress and opposition party workers are observing the Bharat Bandh by holding nationwide protest marches and demonstrations, demanding reduction in excise duties imposed on petroleum products and bringing these products under GST.