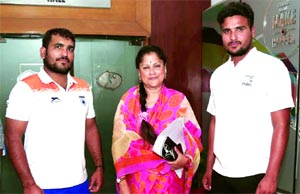 Chronicle Reporter, Bhopal Kabaddi player Manoj Bali, who has been training in T.T. Nagar Stadium, is receiving training for the 18th Asian Games preparation at National Training Camp in SAI Centre, Sonipat, Haryana from 15th March to 14th April 2018. Manoj Bali is among the 25 players selected for the camp from across India. Out of these, 3 are from Madhya Pradesh. Manoj, who is from village Polaykala of district Shajapur, won a gold medal for India in the Invitational Tournament, Kathmandu. He has participated in seven national Kabaddi tournaments and also won bronze medal in Federation Cup, Indore. Before leaving for the National Camp, Manoj met with Minister of Sports and Youth Welfare of the State, Yashodhara Raje Scindia at T.T. Nagar Stadium. She congratulated Manoj and encouraged him to keep up the pace. Director, Sports and Youth Welfare, Mr. Upendra Jain was also present at these moments. It is noteworthy that Manoj Bali has been training under the guidance of Chief Coach, Patiraj Singh Baghel and Assistant Coach (MP Team and NIS Coach), Mr. Alok Singh at the T.T. Nagar Stadium.

Chronicle Reporter, Bhopal Madhya Pradesh State Taekwondo Academy player Shahsank Singh Patel will represent India in the Youth Olympic Qualification Tournament going to be held on 6th-7th April 2018 in Hammamet, Tunisia. Also, Shashank Singh Patel and Anshu Dandotiya will participate in the World Junior Taekwondo Championship, which is going to be held from 9th to 13th April in Tunisia only. Shahshank Singh is a player of 78 kg weight category while Anshu plays in 51 kg weight category. Both the players have been selected at selection trial held in Dhanbad from 8th to 11th March.