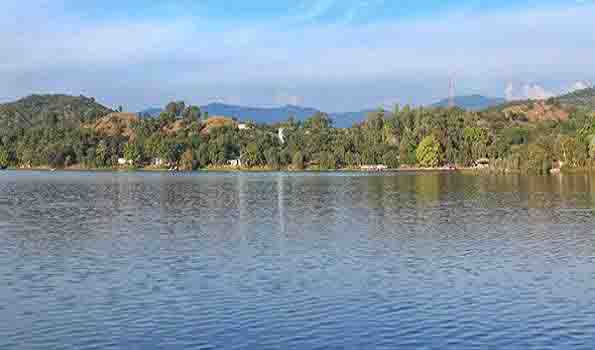 Jammu, To attract more tourists to Mansar Lake in coming years, Jammu and Kashmir Government was all set to install twin clustered 400 meter long ropeway at famous tourist destination Mansar situated in Udhampur district of Jammu and Kashmir. 'Mansar is developing as famous destination among tourists and to woo tourists further, ropeway mono cable fixed group plus gondola will soon be installed,' official sources here said. They said that Jammu and Kashmir Cable Car Corporation is ready for the task and have prepared prefeasibility report of installing 400 meter long ropeway the destination and added, 'it will be 600 PPH ropeway with two clusters. 'Each cabin will have a capacity of six persons and every cluster will have four cabins,' sources further said adding that the report has been sent to the civil secretariat following which work to being on its feasibility.

Every year around 10 lakh tourists are visiting to Mansar and it is being accessed that if 30 per cent of tourists avail Gandola facility, the cost expenditure will be at par in seven years from its launch. 'As if now, Rs 150 has been fixed as fare for per person availing ropeway facility,' sources stated adding that the gondola has been proposed from JKTDC park and will be constructed on Public Private Partnership. 'The structure will be constructed on government land and once it will be commissioned, it will further give boost to the tourism and increase footfall of tourists to this scenic location,' Chief Executive Officer, Surinsar-Mansar Development Authority Nagendra Jamwal, said.

He further said that Mansar lake has emerged as a preferred destination for tourists in Jammu region and from 5.5 lakh tourists in 2017 the lake destination has been receiving ten lakh tourists for the past two years. "Keeping in view the increasing footfall the Surinsar mansar development Authority has taken up major tourism related infrastructure," the CEO stated adding that the Authority has requested JK Cable Car Corporation for carrying out feasibility of a Gandola at Mansar."The JKCCC had deployed it's experts and a Pre feasibility Report has been submitted with an estimated cost of Rs 20 crores rupees," Mr Jamwal added that a ropeway with a carrying capacity of 600 persons per hour with a length of 400 metres under Public Private Partnership mode with a estimated cost of twenty crore rupees has been envisaged.As per official figures, in 2016, 4.57 lakh tourists, in 2017, 5.54 lakh, in 2018, 10.77 lakh and in 2019, 9.65 lakh tourists visited to Mansar.