Martyrs of Chambal Region to be remembered always: Chouhan 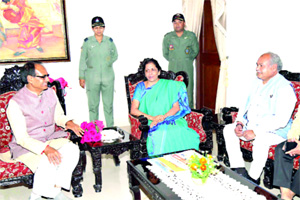 Chronicle Reporter, Bhopal Chief Minister Shivraj Singh Chouhan and Union Defence Minister Smt. Nirmala Sitaraman dedicated Shaheed Smarak constructed at a cost of Rs. One crore 60 lakh to make the memories of martyrs everlasting at Morena today. The Defence Minister and Chief Minister also honoured the families of the martyrs and inaugurated the exhibition of Defence Research Center. Union Minister Narendra Singh Tomar, State’s Minister for Urban Administration and Housing and Minister In-Charge of Morena Smt. Maya Singh, Health Minister Rustam Singh, were present on the occasion. After the dedication of Shaheed Smarak, guests laid wreath while paying tribute to the martyrs. Chief Minister Chouhan said that brave sons of Chambal region have sacrificed their lives for the country. The martyrdom of the braves has been made everlasting by this smarak and the union minister Narendra Singh Tomar is entitle for praise for this. He mentioned that the biggest problem in the development of the Morena i.e. dacoits have been eliminated. Mentioning about the efforts made for the welfare of soldiers by the state government, Chouhan said that an amount of Rs. One crore in the form of honorarium will be given to the family of martyr. Moreover, a life time monthly pension of Rs. 5 thousand will be given to the parents. In addition to this, a government job will be given to one of the family members by the government. Moreover, Chouhan mentioned that mustard has been included under the Bhavantar Bhugtan Yojana. A sum of Rs. 200 on the last year purchase of wheat and Rs. 265 on purchase of wheat in the current year will be provided to the farmers. Only Rs. 200 monthly will be charged for electricity from the poor from April. A sewage project costing Rs. 150 crore is ongoing in Morena city. Chambal water will be brought to Morena. Work of nala no. 1 will be carried out at a cost of Rs. 21 crore. Rs. 11 crore will be paid from the infrastructure funds. Moreover, 300 bed hospital will be upgraded to 600 bed hospital. The broad-gauge project of railway in Chambal division and Chambal express way will accelerate the pace of development in the region. He further mentioned that express way for Sheopur, Morena and Bhind will be constructed. Chouhan also announced for giving tahsil status to Banmore and opening of a college. He stated that all kind of facilities will be provided to the officers to maintain law and order for army recruitment. The Defence Minister Smt. Nirmala Sitaraman, who chaired the programme said that she is feeling proud to visit the Chambal, the land of brave. Smt. Sitaraman further mentioned that she always come across soldiers of Chambal region, wherever she goes to attend the defence programmes. Over 15 thousand soldiers of Chambal region are serving currently in the defence services besides paramilitary forces. She made announcement for opening a Sainik School from the next academic session 2018-19 in Morena. Moreover, she gave consent to restart army recruitment in the Chambal region. Union Minister Narendra Singh Tomar mentioned, he feels happy that Shaheed Samarak has been dedicated in Morena after the Ramprasad Bismil Museum. Along with keeping memories of the martyrs everlasting, the Shaheed Smarak will keep on inspiring youths for patriotism. He further stated that after some obstacles, the development works are taking place rapidly in Morena. Minister In-Charge Smt. Maya Singh said that the Shaheed Samarak will always inspire us for patriotism. Health Minister Rustam Singh mentioned that Morena has history of several brave soldiers. Several brave soldiers of this region have sacrificed their lives during the World War 1 and 2. A book focusing history of Morena and tourism was released in the programme. CM Chouhan and Defence Minister Smt. Sitaraman also honoured the brand ambassador Ku. Adrika Goyal on the occasion.