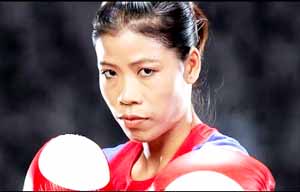 Gold Coast, Indian boxing star and five-time world champion Mary Kom is one step away from clinching a medal after the Indian boxers were handed a draw. London Olympic bronze winner and silver medallist at the Asian Championship Mary kom will be competing in her first and last Commonwealth Games will face Scotland's Megan Gordon in the quarterfinals of the 48kg category on April 8. The boxer is the favourite to claim the gold in a draw which features only eight boxers.Former world and Asian champions L Sarita Devi (60kg) also a medal contender will bout against Kimberely Gittens.