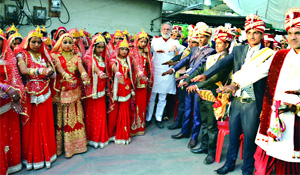 Chronicle Reporter, Bhopal On the auspicious occasion of Akshaya Tritiya, capital city Bhopal witnessed large numbers of marriages and mass wedding functions. Pandits were called from neighbouring places like Berasia, Vidisha, Sehore, Raisen etc to solemnize marriages.Many social organizations conducted mass marriage ceremonies under Mukhaymantri Kanyadan Yojana. Various Samajs (communities) organized mass marriage functions including Pal, Khatik, Rajak and Brahmin. Earlier special worship was performed at Parashuram Mandir at Link Road No. 2. The devotees started thronging the temple from early morning. The abhishek of Lord Parashuram was performed amidst chanting of mantras. After the mass hawan, aarti was performed with 501 diyas. Members of Brahmin community were present in large number. The programme was organized under the aegis of Bhrigu Bhargav Samaj. It is believed that the day of Akshay Tritiya carries Lord Vishnu’s blessings. Any pious deed performed on this day is carried forth by the doer and they can reap eternal benefits from it. This festival of immortality is equally revered by the Hindu and Jain community and is associated with various traditions and rituals. It is said that any initiative taken on this day awards the person with unending merits throughout their life. The day of Akshaya Tritiya holds great significance for the Hindus and Jains. They performed various rituals on this day to keep their mind and heart sacred. Following the advice of the shastras, some people observed fast on this day and worshipped Lord Krishna with 16 items of puja, called Shodashopchar Puja. People visited temples and offered items such as grains, wheat, rice, clothes, gold, gemstones, water, etc., in charity to the Brahmins and the poor and needy people. Many people organised big community feasts called bhandara. People purchased some gold and other valuable items on this day as it is believed that purchasing gold will provide one with the blessings of Goddess Lakshmi and allow prosperity and wealth to flourish at home. According to astrology, Akshaya Tritiya is considered as the day when the lines of destiny or fate change and, hence, people propitiate and venerate the deities so as to get their blessings. The day of Akshaya Tritiya is considered as Swayam Siddha Muhurat. Any auspicious work can be done on this day without worrying about timings. Hence, a lot of weddings and other auspicious ceremonies took place on this day.