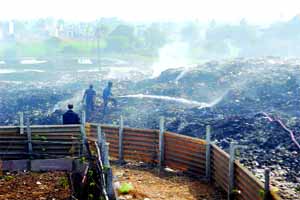 Chronicle Reporter, Bhopal A large part of city was badly affected on Tuesday due to a massive fire in Bhanpur Khanti. Large number of people residing at Govindpura, Ayodhya By-pass and Ashoka Garden and other areas woke up coughing with choked throats due to the effect of smoke that rose from a seething fire in Bhanpur Khanti landfill. This khanti, adjacent to the Delhi-Mumbai railway track, was shut down last week. The 40-year-old dump yard was declared closed after a directive from the National Green Tribunal (NGT). It has been handed over to a private company to carry out scientific waste disposal. It is reported that fire was simmering in the khanti from previous night and fire grew in proportion in the morning. Residents were alarmed as they suspected a gas leakage. They rushed out of their houses but a heavy smog outside had reduced visibility. Queues in the hospitals increased very fast. As smoke billowed from the burning garbage, colonies some three kilometre away were affected. Road and railway traffic was affected all through the morning.

Over 25 fire engines were rushed to the spot to contain the fire, according to Bhopal Municipal Corporation (BMC). BMC fire service in-charge Sajid Khan said the incident was reported at around 3am on Monday night. The exact cause cannot be ascertained. It took about 12 hours for the fire service to douse it. Toxic plastic and oil residue that caught the fire led to a significant drop in air quality. Sources said that lack of security arrangement could have caused the fire. It was reportedly unmanned in the night when the fire reignited. It is unclear how exactly the fire started. The wind direction mostly affected colonies towards the west. The 36-hectare landfill catered as waste dumping for the state capital for over four decades. Daily 850 tons of waste is collected in Bhopal. The total volume of the waste piled up in the four decade-old dumping yard is close to 5 million tons, with hills of trash as tall as a 5-floor building.