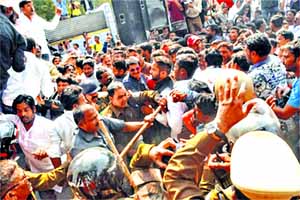 Christchurch, At least six people were injured and a house severely damaged in a gas explosion in northern Christchurch on Friday morning. Police and emergency services have blocked off the affected area in Northwood, a suburb of Christchurch and the injured were rushed to the hospital. Neighbours said they were frightened by the big explosion and saw "all the dust in the air" and debris everywhere. A person wrote online, "I thought it was a small quake as there was the noise and then a rattle." Teachers at a nearby preschool were alarmed by the explosion, saying the kids were fine. Local Christchurch residents reported on social media Wechat and facebook that they heard the big sound all over the city and said their houses "shook violently." A total of 17 properties were hit by debris and at least 50 surrounding properties have been evacuated. All residents in Northwood are being asked to turn off their gas systems following the explosion, Radio NZ reported. However, on hearing the loud bang, some people expressed worries of gunshots as the city is still recovering from the trauma of New Zealand's deadliest terrorist attacks in history which killed 51 people on March 15 by a gunman in two Christchurch mosques.