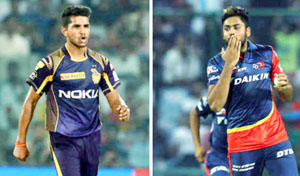 Kolkata, Shivam Mavi, the Kolkata Knight Riders bowler, and Avesh Khan, the Delhi Daredevils bowler, were issued reprimands for two separate incidents during the VIVO Indian Premier League 2018 match at the Feroz Shah Kotla last night. Both Mr. Mavi and Mr Khan admitted to the Level 1 offence under 2.1.7 of the IPL Code of Conduct for Players and Team Officials and accepted the sanctions, an IPL media statement on Saturday said. For Level 1 breaches of the IPL Code of Conduct, the Match Referee’s decision is final and binding.