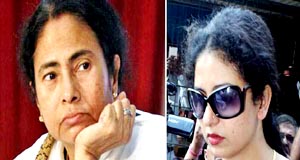 Kolkata, India's fast bowler Mohammed Shami's wife Hasin Jahan today called on West Bengal Chief Minister Mamata Banerjee and conveyed her present state of affairs, a day after the BCCI handed clean chit to Indian bowler of match fixing. Hasin Jahan arrived at the West Bengal Legilstaive Assembly campus to meet the chief minister, who was there after casting her ballot to elect the Rajya Sabha member. Hasin Jahan got the appointment of the chief minister after she went to Kalighat seeking for a meeting. Hasin Jahan spent about 20 minutes inside the chief minister's chamber. The city police is investigating the FIR lodged by Hasin Jahan against her cricketer husband for adultery, infidelity, torture and domestic violence. Hasin Jahan had also accused the Indian cricketer of match-fixing and for receiving money from a Britain-based businessman Mohammed Bhai.