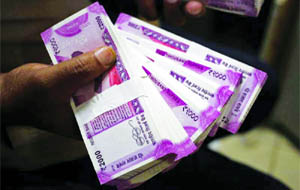 Agencies, Mumbai The Indian M&E sector touched Rs 1.5 trillion in 2017, a growth of almost 13 percent over 2016. With its current trajectory according to the latest FICCI-EY report ‘’Re-imagining India’s M&E sector’’, the sector is expected to touch Rs 2 trillion by 2020, at a CAGR of 11.6 percent The growth according to the report was led by the digital segment. India saw the birth of the digital subscriber with these subscribers making a strong impact on the sector at a growth rate of 50 percent. As per industry estimates, there are around 2 million paid digital subscribers across application providers, and between 1 and 1.5 million customers who have moved entirely to digital media consumption. By 2020 expectations are that there will be 4 million digital only consumers which, along with millions of other tactical and mass customers will generate subscription revenues of Rs 20 billion. By 2020, India is expected to become the second largest online video viewing audience globally.The primary factor for the consumers to adopting to digital format were falling data rates, availability of niche content and also global content, increased OTT-only content, sports and falling data charges. The report mentions advertisers also shifted spends to the digital medium, which led to digital advertising now contributing 17 percent of total advertising in 2017. The share of digital advertising is expected to grow to 22 percent by 2020. ‘’This growth will make Digital the third largest segment of the Indian M&E sector by 2020, overtaking Filmed Entertainment’’ the report said. ‘’The need is to promote India as an entertainment hub to the world, facilitate policy change for the betterment of the Indian M&E industry as well as create and encourage platform for Business-to-Business interface and dialogue,’’ said Rashesh Shah, FICCI president. The TV industry grew from Rs 594 billion to Rs 660 billion in 2017, a growth of 11.2 percent. Advertising grew to Rs 267 billion while distribution grew to Rs 393 billion. Advertising comprised 40 percent of revenues, while distribution was 60% of total revenues. At a broadcaster level, however, subscription revenues (including international subscription) made up approximately 28% of revenues.Industry trends in 2017 also favourably impacted subscription revenues, including-wider implementation of cable TV digitisation, higher realisation from domestic and foreign box office collections of films, increased adoption of subscription OTT platforms and finally increased in-app purchases in the gaming segment. According to the same report going forward, micro- payments, enabled through the UPI and BHIM app developed by the National Payments Corporation of India, will further accelerate subscription revenues for entertainment content. However, advertising revenues witnessed growth of just under 10 percent,due to spillover effects of demonetisation into Q1 of CY2017, the impact of regulations like RERA on ad spends of the real estate sector and advertising spend slowing down for between three to seven months across different segments of the M&E sector in order to manage inventories due to the implementation of GST in July 2017.