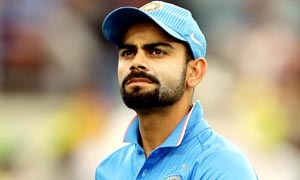 Agencies, Port ElizabethIndia will be keen to bounce back after they were crushed by Proteas in the 4th ODI in Johannesburg by 5 wickets during the rain-affected Pink ODI. The visitors are leading the series 3-1, have won the first in Durban by six wickets, the second in Centurion by nine wickets and the third in Cape Town by 124 runs. In this series, still two match is to be played, interestingly it will be a key contest between Indian spinners, and South African batting line-up. Skipper Virat Kohli could not capitalise potential bowlers like Bhuvneshwar Kumar and Jasprit Bumrah and chose to depend on the spinners, failing to respond to South Africa’s attack. However, whether Kedar Jadhav will be inducted into the 5th ODI still remains in doubt after suffering a hamstring injury in Cape Town and also didn’t play at Centurion. If Jadhav misses at Port Elizabeth on Tuesday, India have no other alternative option as Jadhav is adept at bowling slow spin, and will jell well with Chahal and Yadav. Batsman like Ajinkya Rahane has scored 11 and 8 since making a comeback 79 at no.4. Hardik Pandya is also struggling with his bat and has scored 14 and 9 his last two outings. While former captain M S Dhoni played a good innings of 42 not out in 43 balls, at the Johannesburg saving the middle order batting line-up from further embarassment. Rohit Sharma is also been struggling with the bat scoring just 40 runs in the first four ODIs. His ODI average is just 11.45 in 12 matches in South Africa. Kohli (393 runs) and Shikhar Dhawan (271 runs) have scored nearly thrice the number of runs put together by the remaining batsmen (239) while other Indian batsman are struggling which is a cause of worry for the team management. Meanwhile, South Africa will be looking to take early wickets of Virat Kohli and Shikhar Dhawan who are in great shape. It will be interesting to see what bowling combination the hosts will go in with. On a hard and bouncy Wanderers’ wicket, they had dropped a full-time spinner altogether, relying solely on JP Duminy to do that job. Meanwhile, India’s record at Port Elizabeth is not good as they have lost all 5 ODIs played here since 1992. Four of those defeats came against South Africa, while the Men in Blue even managed to lose to Kenya here during the one-day triangular as part of their 2001-02 tour. In fact, in five previous ODI outings in Port Elizabeth, India have never scored 200 runs here as 176 against South Africa in October 2001 is their highest total yet.