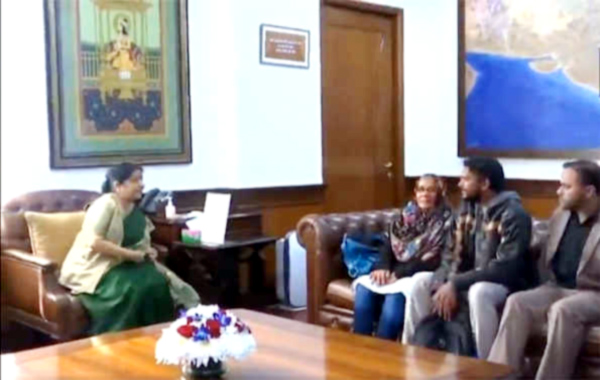 New Delhi, Mumbai resident Hamid Nihal Ansari, who returned to Pakistan Tuesday, met External Affairs Minister Sushma Swaraj here along with his mother. "Welcome home, son! Indian national, Hamid Ansari returns home after six years of incarceration in Pakistan. EAM Sushma Swaraj warmly welcomed him in Delhi today," MEA spokesman Raveesh Kumar tweeted on Wednesday. Ansari, who was jailed in Pakistan, was released on Tuesday by Pakistan and allowed to cross the Wagah border to reunite with his family. His mother got emotional on the occasion and said: "Mera Bharat Mahan...". She also thanked Ms Swaraj and said "madam ney hi sab kiya hae (It is you who has helped his return)". Ansari also turned sentimental and looked on the two with his moist eyes. "Bura samay hota hae beta...Bura waqt hota hae (It is time which makes us to do mistakes)," Ms Swaraj remarked while interacting with them. Ansari returned India six years after he was detained by intelligence agencies in Pakistan for entering the country illegally reportedly to meet a girl he had befriended online. Ansari was detained by Pakistan in 2012 after he entered the country from Afghanistan and subsequently sentenced to three years’ imprisonment by a military court in 2015. The 33-year-old Mumbai resident was lodged in the Peshawar Central Jail after being sentenced by the military court on December 15, 2015. His three-year jail term ended on December 15, 2018 but he was not able to leave for India as his legal documents were not ready. Last Thursday, the Peshawar High Court gave the Pakistan's federal government a month’s deadline to complete his repatriation process. He was released on Tuesday, December 18.