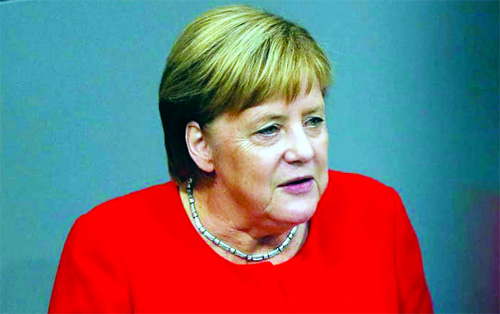 Agencies, Berlin, Chancellor Angela Merkel assured parliament Wednesday she takes seriously Germans’ concerns about crimes committed by migrants and pledged a strong response, but condemned recent demonstrations as “hateful,” saying there is “no excuse” for expressions of hate, Nazi sympathies or violence in response. The comments come after the killing of a German man for which an Iraqi and a Syrian have been arrested prompted days of anti-migrant protests in the eastern German city of Chemnitz that at times turned violent. Neo-Nazis were seen giving the stiff-armed Hitler salute in the largest demonstration, the day after the killing, which attracted some 6,000 people, and on the sidelines of the protest masked men threw stones and bottles at a kosher restaurant yelling “Jewish pig, get out of Germany.” The day before, in spontaneous protests by hundreds immediately after the killing, several foreigners were attacked and injured in the streets. Merkel assured lawmakers that her government was equally aware of its responsibility to take the wider concerns of the public seriously, and that it was working with “all resolution” on the issue. “We are especially troubled by the severe crimes in which the alleged perpetrators were asylum-seekers,” she said. “This shocks us... (and) such crimes must be investigated, the perpetrators have to be taken to court and punished with the severity of the law.” But she said the concerns were “no excuse” for the demonstrations that followed the killing in Chemnitz. Merkel dismissed as semantics an argument over whether the foreigners were “hunted” in the streets by the protesters, condemning the demonstrations as “hateful.” “There is no excuse or justification for hate, for the use of violence by some, Nazi symbols, hostility against people who look different, the occupation of a Jewish restaurant, attacks on police — and heated debates about whether it’s hate or a hunt don’t help,” Merkel said to applause. Copyright 2018 The Associated Press. All rights reserved. This material may not be published, broadcast, rewritten or redistributed.