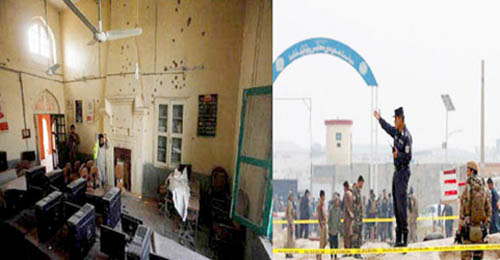 Kabul, The death toll of a terrorist attack against a government office in Kabul rose to 43 with an Afghan Public Health Ministry official said on Tuesday. The siege lasted for about eight hours, leaving 43 dead and over 30 injured, Xinhua reported.The attack occurred on Monday afternoon when a suicide bomber detonated a car bomb outside the targeted office, which provides service to family members of soldiers and ordinary people who lost their lives during the war or terrorist attacks. The attack started with a car bomb explosion at 3:20 p.m. local time (1050 GMT) near the Ministry of Public Works and the National Authority for People with Disabilities and Martyrs’ Families in Kabul’s PD16 – near Makroyan-e-Kohna colony. The attackers then started gunshots and entered the building of the National Authority for People with Disabilities and Martyrs’ Families. Three hours after the attack, Nusrat Rahimi, deputy spokesman for Ministry of Interior, said two attackers were gunned down by government forces, who arrived at the scene shortly after the first explosion. At least two gunmen made their way inside the building after the blast, spreading bullets on the people inside before security forces' arrival. Eyewitnesses said helicopters were also seen in the area to support ground forces who are busy in rescuing those under siege. “They (attackers) opened fire on the people and killed them and then made their way to the ministry,” said Awal Khan Amiri, tolo news reported an eyewitness as saying. “We were selling lemons there. The car was burning and we were hurt by the explosion,” said Zekrullah, a Kabul resident, who sustained injuries in the attack. Almost seven hours after the attack, Interior Ministry's spokesman Najib Danish said the building that insurgents had attacked has been cleared. The attack occurred in Makruyan-e-Awal locality near Shashdarak, where several foreign embassies located. The area also gives home to several apartment buildings and several government offices, including Afghan Ministry of Public Works. No group has claimed responsibility for the attack so far.