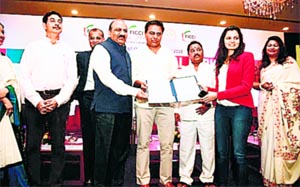 Agencies, Hyderabad, Telangana IT and Industry Minister K T Rama Rao presented land allotment letters to 18 FICCI FLO women entrepreneurs at the FLO Telangana State Industrial Infrastructure Corporation (TSIIC) in Sultanpur on Friday. Speaking on the occasion, Mr Rao said that the state government through various industrial parks allocated a total of 200 acres to three different women bodies. “We have allocated 50 acres to FLO at Sultanpur, 30 acres to COWE at Toopran and 120 acres to ALEAP”, he said. Ten percent of land in all the 140 various industrial parks in the state are earmarked for women entrepreneurs, he said and added that if required more land, TSIIC would facilitate the same for them. FICCI National President Rasheesh Shah said India is a country of entrepreneurs. We want to be boss of our own. It is a golden era in India for industries. India has registered 2.5 Trillion in GDP. It is growing so fast that it is doubling its GDP every 7 years, he added. FLO is India’s largest women Business Organisation in India. To be an entrepreneur is not easy. If government can make it easy, these entrepreneurs can go a long way, Mr Shah said. India has the highest women pilots in the world. 13 per cent of India’s pilots are women, while world average is just 3 per cent, he added and said more economic power should be given to women. Telangana Principal Secretary Industries Jayesh Ranjan, Priyanka Ganeriwal, FLO HYD Chairperson, Catherine Hadda, US Counsel General and others graced and spoke on the occasion. The FLO TSIIC Women’s Industrial Park at Sultanpur in Pattancheru is spread over 50 acres adjacent to the medical devices park. The Flagship Project in collaboration with TSIIC is the first for both FLO and its parent body FICCI. In the light of the “Make in India” campaign that has set strong grounds for awareness and encouragement to women. The Park will house 100 per cent women owned and women run businesses representing varied Industry Verticals primarily in the green category. The current applicants belong to varied industries: Packaging, Organic Handloom Apparel, Electronics & Electrical, Food Processing, Medical Devices, Furniture, General Engg and Metal Powders.