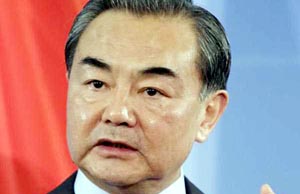 Vienna/Tehran, The foreign ministers' meeting on the Iran nuclear issue on Friday would send a clear signal of solidarity to maintain and implement the Iran nuclear deal reached between Iran and world powers in 2015, according to Chinese State Councilor and Foreign Minister Wang Yi. The meeting in Vienna by foreign ministers of France, Germany, Russia, Britain, Iran and China will be the first foreign ministers' meeting by parties remaining within the Joint Comprehensive Plan of Action (JCPOA) after the US withdrawal from the deal. Responding to a question at a joint press conference with Austrian Foreign Minister Karin Kneissl on Thursday, Wang stressed that all parties to JCPOA, an international multilateral agreement endorsed by the United Nations Security Council, have obligations to comply with and implement it. Failure to maintain and implement the deal would not only affect the Iran nuclear issue itself but also cause serious negative impacts on the functioning of the non-proliferation regime as well as on the situation in the Middle East, Xinhua quoted Wang as saying. Calling the upcoming meeting as "very timely" and "necessary", Wang said China is willing to work with the European side to continue to make unremitting efforts towards maintaining and implementing JCPOA. On Friday, Iranian Foreign Minister Mohammad Javad Zarif met his Russian counterpart Sergey Lavrov and discussed the the issues expected to be raised in the meeting in coming hours, reports IRNA. Prior to that, Zarif met Wang as well as High Representative of the European Union for Foreign Affairs and Security Policy Federica Mogherini. Mogherini would chair Friday's meeting. US President Donald Trump announced on May 8 that Washington was pulling out of the nuclear agreement.Trump also said he would reinstate US nuclear sanctions on Iran and impose “the highest level” of economic bans on the Islamic Republic. Under the JCPOA, Iran undertook to put limits on its nuclear programme in exchange for the removal of nuclear-related sanctions imposed against Tehran.