Ministry established itself as a core unit of governance : Communications Minister 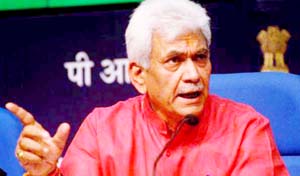 Agencies, New Delhi, Overcoming the pervasive trust deficit through transparent auctions of spectrum, and bridging the digital divide in the country by undertaking digital infrastructure projects were the remarkable achievements of the Communications Ministry in the last four years, Telecom Minister Manoj Sinha said here on Tuesday. Sharing the achievements of his ministry with the media persons on completion of four years of BJP government, Mr Sinha said his ministry established itself as a core enabling unit of the government, driving the country’s socio-economic development by providing strong digital connectivity to support and deliver citizen-centric services. “The Ministry of Communications has established itself as a core enabling unit of the Government of India, driving the country’s socio-economic development during the last four years by providing strong digital connectivity support and delivering citizen-centric services – in the true spirit of “Saaf Neeyat, Sahi Vikas”, Mr Sinha said. Enlisting the achievements of the Ministry, Mr Sinha said teledensity increased from 75 per cent to 93 per cent during the period while Internet coverage shot up by over 75 per cent. The number of users subsequently rose from 251 million to 446 million during the period, he added. He said the government spending on telecommunication infrastructure and services also witnessed a six-fold jump – from from Rs 9,900 crore during 2009-14, to Rs 60,000 crore during 2014-19. Besides, number of mobile Base Transceiver Stations (BTS) increased from 7.9 lakh to nearly 18 lakh and country-wide Optical Fibre Cable (OFC) coverage doubled from 7 lakh km to 14 lakh km, the Telecom Minister said. Broadband access also grew from 61 million to 412 million subscribers. He said consumers across the country were benefitted largely during the period as tariff for voice as well as data declined by 67 per cent and 93 per cent respectively. Not only this there was about five-fold jump in FDI inflows in the Telecom Sector – from USD $1.3 Billion in 2015-16, to $ 6.1 Billion in 2017-18, he said. Mr Sinha further said, the Prime Minister’s motto of “Sabka Saath, Sabka Vikas” was reflected in the Department of Telecom’s efforts to Connect the Unconnected – through rural digital infrastructure projects such as BharatNet, as well as through projects for the North-East Region, Left-Wing Extremism (LWE) Affected Areas, the Andaman and Nicobar Islands, and Lakshadweep. The Department also took proactive steps to move the country to the forefront on the global stage in this technology-driven sector. “We missed the 3G and 4G buses”, said the Minister; “but 5G is a bus we cannot afford to miss”. Mr Sinha said proactive engagement, planning, and investment have been initiated to leverage new technologies for the welfare of citizens. A High-Level Forum (HLF) for 5G India has been set up; a 5G test bed is being established through budgetary support; and a progressive and forward-looking Draft National Digital Communications Policy (NDCP) 2018 is already in the public domain, setting aspirational targets to guide the department over the next few years. Talking about the achievements of the Department of Posts (DoP) , the minister said DoP has initiated transformative changes which aim to radically alter the face of Post Offices in the country. From a ‘stagnating business growth’ situation, the Department has now moved to successfully launch citizen-centric services which leverage its’ unique strengths – unmatched country-wide reach, and strong trust of the people, especially in non-metro areas. Both the Departments continue to be focused on acting as catalysts – to take the benefits of a rapidly developing India to the remotest corners of our country,championing the cause of the Government’s flagship programs such as Digital India and Financial Inclusion, Mr Sinha said.