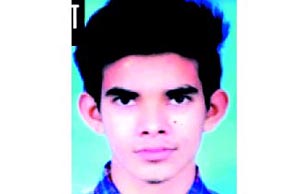 Chronicle Reporter, Bhopal A student who went missing under suspicious circumstances from the Kolar area on Monday has been located in Ludhiana. A team of police along with the boy’s family members has left for Ludhiana to bring the boy. Earlier on Tuesday, the student’s family members created ruckus in the school. The police reached the spot and pacified the boy’s kin. It is not clear why the boy fled. On the other hand the kin have alleged that the boy was thrashed and made to stand for half-an-hour by the school teacher after which he fled. Police said the matter is being investigated. According to the police, Rohit Singh Bairva, 17, son of Man Singh, lives in Banjari. He studies in Class-8 at Rose Mary Convent School, Banjari. On Monday he did not return from school. Rohit’s family members first searched him at their level but when they failed to find him they reported the matter to the police. When the police checked the footages of CCTV cameras near the school they found Rohit had boarded a low-floor bus at 2 pm. Police then checked the footages of CCTV cameras near the railway station and bus stand. He was seen boarding a Ludhiana bound train at Habibganj railway station. After getting this vital clue, police alerted the railway department. Rohit was safely received by railway staff at Ludhiana station. Rohit’s uncle Vikram Singh said that his friends told that Rohit was made to stand for half-an-hour by the teacher for not completing the homework. He was apparently depressed on account of punishment and so fled from home. Police said preliminary investigation has revealed that the boy was also scolded by the family members. Police are waiting for the boy to return so that the exact reason could be ascertained.

Retired Additional DGP (Fire Services) VK Panwar is among three booked by Lokayukta for making purchases against the rules. The three have been booked for cheating and under other sections of IPC. According to the Lokayukta, purchases made against rules resulted in loss of Rs 97 lakh to the state ex-chequer. According to the information, Manoj Rawat had complained to Lokayukta on December 28 2010 that ADGP had made purchases of hose pipes from a company that did not fulfill the criteria. Lokayukta probe revealed that ADGP Panwar made purchases from a Mumbai-based firm and to benefit the firm payment was made at the rate of Rs 236.60 per meter instead of Rs 97.14 per meter. This resulted in financial loss of about Rs 97 lakh to the government.

Three people, hailing from Jharkhand, have been arrested on the charge of duping people by obtaining OTP (one-time password) and ATM card number on the pretext of linking ‘Aadhar’ card with bank account, police said. A complaint was lodged by telecom company official Laxmi Singh Rajput that he had received a missed call from ‘9733307017’. When he returned the call, the person identified himself as a State Bank of India official and sought his ATM number and OTP for linking ‘Aadhar’ card to his bank account. However, he used these details for doing online shopping of Rs 1,30,000 from a retail store in Ranchi. A six-member Cyber Crime Branch team reached Ranchi and detained Bihar’s Jumai-resident Santosh Kumar Yadav, who confessed to the crime.