Mitron' trailer: Witness journey of lazy, crazy Jai from a dreamer to an achiever 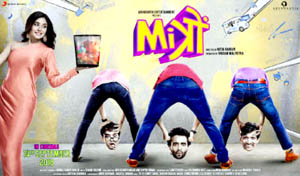 New Delhi, The trailer of National award winner Nitin Kakkar directorial 'Mitron' launched on Tuesday, is set to take the audience on a hilarious roller coaster ride. Starring Jackky Bhagnani as the lazy, crazy and good for nothing Jai, the trailer unfolds the journey of him and his friends from dreamers to achievers with the help of Kritika Kamra. After tickling the funny bones of the audience with the first look showcasing the unique and crazy matrimonial ad, the teaser showcases Jai aka Jackky Bhagnani meeting his prospective wife Kritika Kamra. While the first look video depicted the warm bond of friendship between Jai and his friends the poster gave the first glimpse of Kritika Kamra in the film. Television sensation Kritika Kamra is all set to make her Bollywood debut with 'Mitron'. Starring Jackky Bhagnani, Kritika Kamra, Pratik Gandhi, Shivam Parekh and Neeraj Sood, 'Mitron' promises to take the audience on a roller coaster ride of emotions. 'Mitron' is slated to release on September 14.